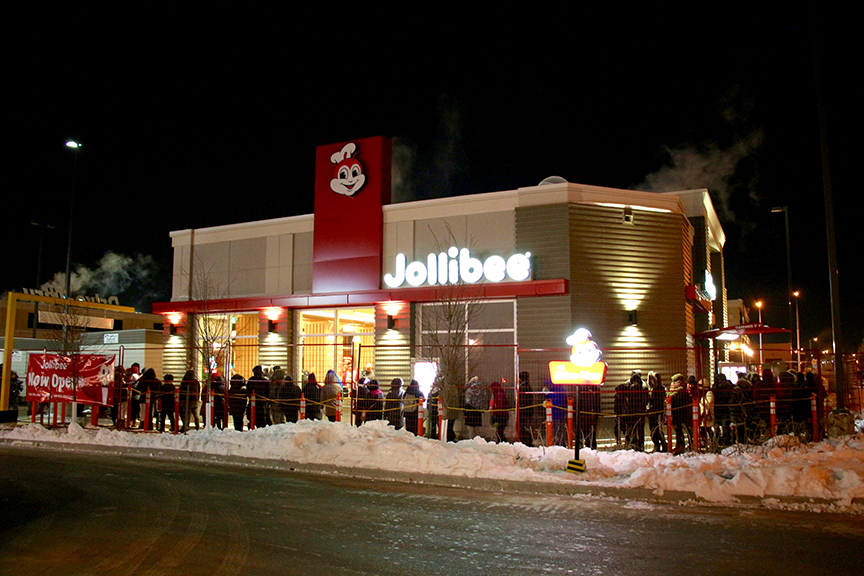 EDMONTON — Hundreds of Filipinos braved the cold, cold winter in the City of Winnipeg, Manitoba Province to line-up for the opening of Jollibee, the first to open in Canada, last week, on Thursday.
TV footages taken by CBC and other TV Networks showed excited Pinoys bundled up and waited in subzero temperatures, -27 degrees Celsius, at 1406 Ellice Avenue, the exact address that is now registered on every Pinoy’s GPS.

“We are very encouraged by the turnout and excitement at the grand opening of Canada’s first Jollibee,” said Jose Miñana, Jollibee Foods Corporation’s Group President for North America and Foreign Franchise Brands, in a press statement. “It bringsus great joy that we are able to bring a taste of home to Filipinos and a new culinary experience to Canadians.

Jollibee Foods Corporation is currently ranked as the largest Asian restaurant company in market capitalization, aggressively expanding in North America. It currently operates in 12 markets, with a total of 3,236 stores globally, of which 1,111 are Jollibee brand stores. The company’s aggressive expansion plan in Canada and the U.S. is part of its overarching goal to be among the top five restaurant companies globally by the year 2020, the press statement added.

In Edmonton, Jollibee fans will have to wait until 2018 to experience the “crispylicious and juicylicious Jolly Crispy Chicken”.  In the Philippines, that recipe is popularly known as “Chickenjoy”

“My friends told me that Jollibee is coming to Canada and I’m excited, even though it’s going to be in 2018 here in Edmonton but I’m really excited they are opening here,” said Bert Batac, who used to work at a fastfood store chain.

Jollibee Winnipeg is the 35th store in North America and three more stores will open next year at Winnipeg Northgate, the second one for Manitoba Province, and the Cities of  Scarborough and Mississauga, which also have big Filipino population, in Ontario Province.(mpb/newslineph)
Be informed
Top Stories