Posted on August 13, 2017 by NewsLine Philippines 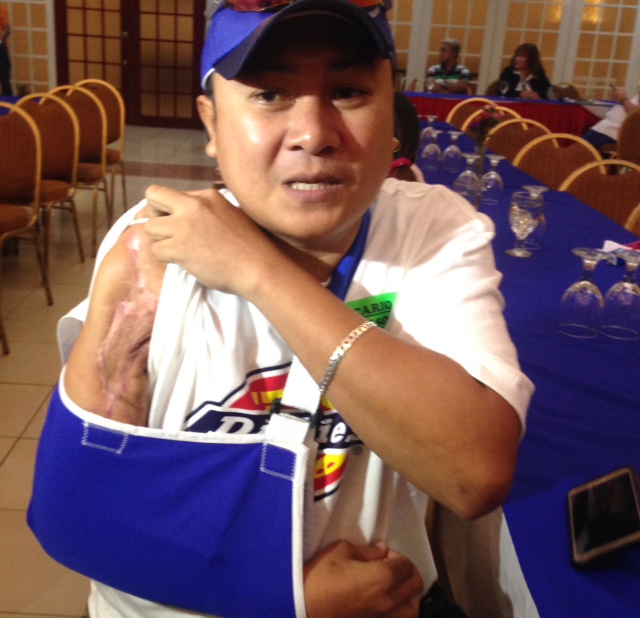 Erickson Nacario, 38, one of the survivors of the September 2, 2016 explosion was tear-eyed when he told reporters he longs for justice.

Nacario is among the 74 survivors said “They’ve been arrested. Guinoo na lang bahala nila (I leave it all to God),” he said without any hint of anger and bitterness. Nacario is scheduled for another operation for the broken bones on his right arm. He was hit on his right arm, right foot and another on the left arm. He continues to undergo therapy.

Nacario can only thank that he and his wife survived. The couple went to Roxas for a massage but while approaching the areas for the masseurs the bomb exploded and shrapnel hit them.

The incident changed his life from being  real estate agent he now operate a small store within his house as  his damaged right foot hinders him to guide prospective buyers to the site.

The city government continues to  shoulder expense for  medication and therapy. From the first day of his hospitalization until today, close to half a million pesos already spent for him alone.

Nacario is one among the 68 survivors qualified to get aid from the trust fund the city raised from donations.

Nadela said there are three kinds of assistance that the city government extends to the survivors: livelihood, continuing medication, and education.

The education of the survivors (students) and the dependents of those who died in the incident is covered by the city government under its Educational Benefit System Unit (EBSU), which has already 1,051 scholars.

“This is the commitment of the city government to help,” Nadela said. The money was raised through the donations coming from the city government, Office of the President, PAGCOR, Davao Medical Education Management Service, PDP-Laban, House of Representatives, Davao City First District Representative Karlo Nograles, Davao Evangelical Church, and Kiwanis Philippines South.

Nadela said the city government will continue to monitor the beneficiaries to ensure they use the money properly. The city will also help them get training as small entrepreneurs.

Melvin Antigas, a masseuse, said the assistance is a big help for them. Antigas went back to Roxas Night market after recovering from minor injury. She said she cannot do anything but to go back to Roxas to earn income. It is her livelihood since 2008.

This time, she said, she and other colleagues are more vigilant and conscious of their surroundings. “We are more watchful of bags, look at the faces of customers,” she said.

Speaking on behalf of the beneficiaries, Joana Reyes said encouraged  them to move on. Reyes thanked the city government and the donors for all forms of assistance to her and other survivors of the Roxas bombing. (Lilian C. Mellejor/PNA)