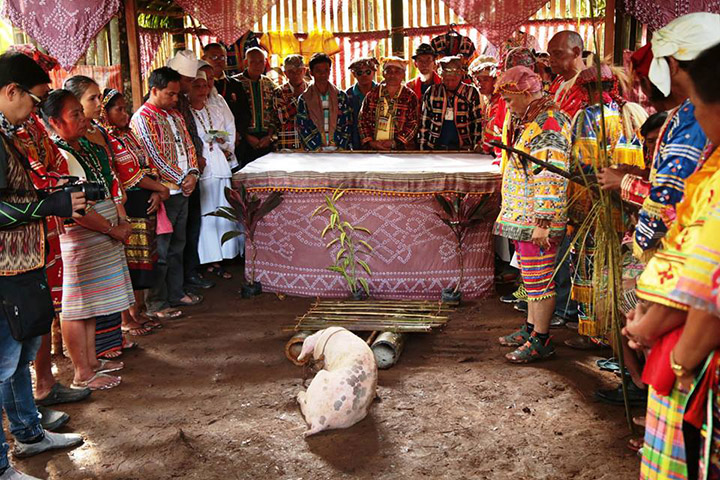 KIDAPAWAN CITY, NORTH COTABATO– It was an hour before the sun shines Friday, May 20, when spiritual and tribal elders from the eight ethnic groups of surrounding Mt. Apo joined forces to save their sacred land Mt. Apo which they call Apo Sandawa, they held Panuvaran, spiritual ritual for appeasement, cleansing and offering for cleansing for their ancestors.

Lake Agco, the boiling lake at the foothills of Mt. Apo was wrapped with clouds, there was silence, one can only hear the boiling lake, chirping birds, witness the cascading waters and the sound of the cold wind as the ritual was on going.

The “Ponuvad to Kosunayan to Apo Sandawa” or a Prayer for the Appeasement of Apo Sandawa is a cultural ritual of Indigenous Peoples which seek conciliation to the Spirit of the tribe’s ancestors guarding and living therein.

In a secluded place, Bai Magdalena Suhat, a Walyan (spiritual doctor) together with two spiritual leaders led the ritual, they brought their Diwata, Congresswoman Nancy Catamco, clad in all white and barefoot, to the sacred place where small well with crystal clear water can be found. With their hands filled with pure water, they drenched Catamco as they Prayed befor etheur ancestors.

The group was facing the boiling lake, surrounded by century old trees and covered by fully vegetated hedge plants.

Holding the sacred Panuvaran at Lake Agco, was their way of asking forgiveness to their God and ancestors whom they believe have been disrespected by the conquerors, those who came to the mountain disregarding their culture.

They believe, the recent nine-day fire which damaged over 300 hectares of Mt. Apo was a strong message from “Apo”, a reason why they held the Panuvaran.

Tribal elders recognized Mt. Apo as sacred and holy, a resting place of their ancestors.

“The place should be preserved and respected,” says Leah Labrador, a spiritual leader.

The Panuvaran ritual highlights the “bathing” of the person whom the tribe call Diwata- Catamaco, who was born to Ovu-Manovu parents.

After the “cleansing” the spiritual leaders along with the two women elders proceeded to the “Panuvaran” the place for prayer to cue the “Sapat to Tomba’a” offering to the altars to begin.

On her way to Panuvaran, a barefooted Catamco walked in the middle of the bushes leading to a native hut where about 425 tribesmen waited to formally confer her as their Diwata.

When she showed up, the beatings of the indigenous agong became for deliberate and tribal instruments played as everyone chants “YOY! and happily greeted Catamco.

When everyone was settled, a white hog and chicken together with baskets of fruits were offered.

Middle of the ritual one of the spiritual leaders, Walyan Lipatuan Veloso Suhat fainted and there was total silence among and soon after Suhat lectured how preserved the sacred mountain.

“I am happy you remember us by offering your prayers and your fruits, but you must remember, our land needs to be respected and protected, people come to our lands without showing respect to us, we are here watching everyone, the fire which you witnessed was a message of anger (referring to the burning of Mt. Apo), everyone must respect each other because this land is sacred,” Labrador who interpreted the Manobo lecture told Rappler emphasized.

Considering and proclaiming Catamco as their Diwata went through a very meticulous procedure says Leah Labrador, a tribal chieftain.

“We just do not name anyone our Diwata because that is a sacred name to us, but we see in Catamco a forgiving leader, a woman who understands us and the woman who is there to fight and protect the tribe, she understands us, she leads us, and she never abandoned her tribe despite the status she have now, so the elders conferred her Diwata,” Labrador said in vernacular.

The Panuvaran, according to Veloso was the ritual of prayer of appeasement and the activity was meant to ask forgiveness to all the acts which provoked their Apo.

Suhat said the leaders come together to let the people know that the relationship between the tribes and Apo Sondawa has never been disconnected.

“Although to a certain extent, some IPs had been culturally assimilated, still the indigenous way of life are practiced by them”, Labrador said added.

Elders and the tribesmen happily greeted Catamco as she walked through the bushes after the cleansing.

Along with the two women elders she preceded to the “Panuvaran” the place for prayer to cue the “Sapat to Tomba’a” offering to the altars to begin.

Considering and proclaiming Catamco as their Diwata went through a very meticulous procedure says Leah Labrador, a tribal chieftain.

“We just do not name anyone our Diwata because that is a sacred name to us, but we see in Catamco a forgiving leader, a woman who understands us and the woman who is there to fight and protect the tribe, she understands us, she leads us, and she never abandoned her tribe despite the status she have now, so the elders conferred her Diwata,” Labrador said in vernacular.

SHE TALKS THE WAY HOW OUR ANCESTORS SPEAKS

Lipatuan Veloso Suhat, a traditional IP Leader said naming Catamco as Diwata has gone through as process.
He said, IP leaders could not just name anyone to be Diwata. It should be anchored to the indigenous tradition and cultures in picking leaders, the same way in naming a Diwata because it has bad or good repercussion after doing such an action.

“We do not doubt, Apo Sandawa and the spirit of our ancestors dwells in to her (Catamco) to serve as a visible and corporeal Diwata – the overseer and keeper of the tribe”, Lipatuan said.

What calls the attention of the most tribal elders according to Suhat was her deepness and good judgment for the tribe.
“She was talking the way how our ancestor speaks, bottomless words would just come out from her mouth and it strikes through the heart of the tribes”, He added.

AN EXTRAORDINARY MISSION
Speaking her native language, Catamco emphasized “With all of my heart, I will accept this extra ordinary mission you have put on my shoulder. I will stand for the tribes as long as I live”, Catamco stressed as she accepted and received the tribes declaration.

She added that she will continue her great battle in congress insure the creation of an IP department under the office of the President to be called as the Department of Indigenous Peoples before her 3rd term ends.
For the Diwata, the presence of tribal elders from North Cotabato, Davao and Bukidnon provinces that gathered at the foot of Mt. Apo is a first-rate indicator that IPs are still intact.

With her conferment, “She knows of the great task ahead, but we are confident, she will never leave us behind because we know her and she fights to defend us and we have proven that,” says Nilo Balang, a walyan.

“Her battle is the battle of the majority of the tribe and we are happy and united because she has been there for all of us, she speaks in our behalf because she is one of us,” Balang emphasized.

Datu Luis Lambac of Davao City said Catamco’s conferral is a message to the tribal communities that they are one and they will be behind her.

Catamco urged the group to safeguard Mt. Apo as they have scheduled series of tree planting activities “the tribal way” to protect Mt. Apo.

A coordination meeting has been scheduled to meet various tourism councils within the Mt. Apo range to inform every local government units that before a trek to Mt. Apo is done, climbers must be educated and briefed about the sacred land.

“We are not anti-tourism, but we only have one Mt. Apo, it is our sacred land, respect is due,” Catamco added.-Editha Z. Caduaya/newsline.ph