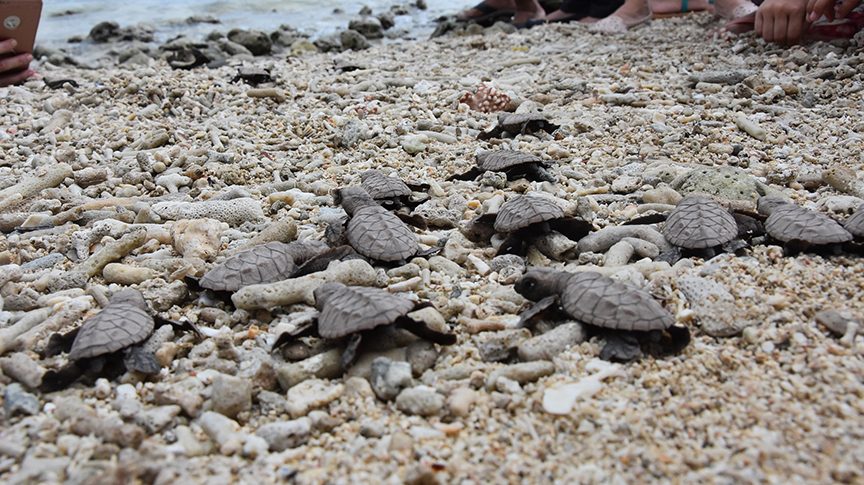 There was once a sailboat enthusiast who found himself alone, floating in the middle of nowhere after encountering a sudden sea storm. With his boat capsized, this shipwreck survivor was given a new lease of life by a benevolent marine turtle. A two-day piggy back ride brought this lucky fellow back to land and he lived happily ever after.

Early this month, the Davao Light and Power Co., Inc. (DPLC) together with the regional office of the Department of Environment and Natural Resources (DENR) released 186 hatchlings of marine turtles – locally known as “pawikan” – to the open sea.

The hatchlings were hatched at the Cleanergy Park in sitio Punta Dumalag at Matina Aplaya, Davao City. They came from the second batch of pawikan eggs found at the park early this year.

So far, the figure is “the largest number of hatchlings released at the Cleanergy Park since 2014,” said a press statement.

A few weeks earlier, Davao City Mayor Sara Duterte-Carpio led the release of 169 pawikan hatchlings to the sea at the same place.

“Marine turtles are among the most endangered marine species in the world. The presence of the pawikan is a sign we have a healthy marine ecosystem here. We can share beaches and ocean with them but it requires commitment and effort on our part to make certain that future generations will have opportunity to know these creatures and co-exist with them,” DENR’s Gilbert R. Dragas was quoted as saying.

The eight-hectare Aboitiz-owned as nesting sanctuary for the critically endangered marine turtles. The 2-kilometer stretch of white sand peninsula of Punta Dumalag was once called the Marine Turtle Sanctuary. It is now part of the 37-hectare Marine Protected Area that was established through Council Resolution No. 02504-03. Swimming and fishing are not allowed in the area.

Last March 13, the Cleanergy Park was recognized by the city government of for its contribution to environment protection and conservation. The recognition was given during the “Pasidungog: Garbo sa Dabaw” event held at the Royal Mandaya Hotel.

“With high hopes, Davao Light wishes that these pawikan hatchlings will grow to the fullness of their potential as they enter their home – the blue waters of the ocean, and that their number will multiply for the next generations to see,” said Fermin Edillon, Davao Light Community Relations Manager, of the 186-released pawikan hatchlings.

Marine turtles have been on this planet since time immemorial that they are now considered “living fossils.” As a matter of fact, they may be around during the age when dinosaurs ruled the earth.

“Some 200 million years ago, marine turtles developed as the earth throbbed with dramatic geophysical changes surviving as their living conditions changed, adapting to the natural rhythms of pre-historic life,” wrote Marizal Calpito and Lourdes Calacal in an article, which appeared in Canopy International. “Down through the ages, they thrived, remaining much the same as their hardy ancestors.”

Despite their origins stepped in antiquity, much is to be desired about them: how they navigate, where they grow up, or how long do they really live. “They’re a mystery,” observed Dr. Archie Carr, a visionary herpetologist who was considered as the “Father of Marine Turtle Research.”

But the more scientists know about marine turtles, the more they don’t about them. “I don’t know any branch of science where we have applied so much effort and (yet) learned so little,” complained Dr. Richard Byles of the United States Fish and Wildlife Service.

What human beings know is that marine turtles belong to the order Chelonia, an order of reptiles that has existed and flourished since pre-history. They are air-breathing creatures that live their long legendary lives mostly in the sea. But they do spend a critically important part of their life stages in sandy beaches.

Of the eight species of marine turtles known to man, five of them can be found swimming in Philippine waters. These are the Green Sea (known in the science world as Chelonia mydas), Hawksbill (Eretmochelys imbricata), Loggerhead (Caretta caretta), Olive Ridley (Lepidochelys olivacea), and Leatherback (Dermocheyls coriacea).

Unfortunately, all eight species are listed under the Appendix I of the Convention on International Trade of Endangered Species of Wild Fauna and Flora, which means the trade of these species and subspecies is strictly “prohibited except for educational, scientific or research and study purposes.”

The Conservation of Nature and Natural Resources has also classified the eight species as endangered. This is so because “their populations are in danger of extinction and whose survival is unlikely if the causal factors continue to operate.”

If marine turtles survived in the past, they will have a hard time in the present time. “Today, man’s growing need for survival has endangered the very existence of these sea-dwelling creatures,” wrote Jonas H. Liwag in an article which appeared in Mabuhay. “All over the world, these reptiles are threatened with extinction by indifferent and relentless commercial exploitation.”

Since the dawn of history, meat of marine turtles had supplemented the diet of man. Seventeenth century sea faring men used turtles as ship’s provisions – their ability to stay alive for months without food and water ensured a steady supply of fresh meat without storage problems.

These days, the main primary reason for the decline of marine turtle population is catching the reptiles alive. They are valued for their precious shells. “It was beauty that all but killed the Hawksbill turtle,” wrote one environmental journalist. “Polished and carved, the black-and-yellow plates on its back were long sought for tortoise-shell jewellery and combs.”

The gathering of pawikan eggs, which are considered by Chinese as aphrodisiac, has contributed to the rapid disappearance of marine turtles. The eggs, which look like ping-pong balls, are also prize as energizing protein. But marine scientists dispel the myth. They said pawikan eggs are just like chicken eggs and nothing more.

Pollution has been cited as another prime factor why pawikan are on the verge of extinction. Included in the millions of tons of garbage dumped annually into the sea are plastic materials which marine turtles mistake for jellyfish, squid, or some other food. Once digested, plastic wastes can block the turtle’s digestive tracts, causing starvation and ultimately death.

The rapid development of beach resorts for the tourism industry has destroyed the nesting beaches of marine turtles. Sadly, they often travel huge distances only to find human development on or near their nesting sites.

Since 2001, hunting, sale and killing of marine turtles have been banned in the Philippines. The Wildlife Conservation Act, or Republic Act No. 9147, penalizes violators with a fine of up to P100,000 and one year in jail.

Despite sincere efforts by the government and some Filipino environmentalists to save marine turtles from extinction, the decimation of the endangered species continues unabated.

In terms of conservation, are Filipinos willing to pay for the protection of their endangered species like marine turtles?

To find out, the Economy and Environment Program for Southeast Asia (EEPSEA) funded a comparative study that was conducted not only in the Philippines but also in China (Beijing), Thailand (Bangkok) and Vietnam (Ho Chi Minh and Hanoi).

“Respondents were provided information about the importance of marine turtles to coastal and ocean ecosystems and the threats and risks of extinction,” the researchers explained. “Once the hypothetical marine conservation program was introduced, respondents were asked whether they would be willing to contribute to the program by paying a monthly surcharge on their electricity bills for a period of 5 years.”

During the surveys, the respondents were informed that the electricity authority in their respective areas would simply collect and transfer the money to the Regional Marine Turtle Conservation Trust Fund and would not be involved in any way in the administration of the fund.

In the Philippines, the survey was conducted in Davao City which was described as “the smallest city” – in terms of population (with “about one million people”). In comparison, the most populous city was Beijing in China with “over 15 million people.”

Davao City ranked first among those people who were asked if they have seen a live marine turtle. At least 67% of the respondents said yes while Bangkok (57%) came next, then Beijing (53%) and finally Ho Chi Minh/Hanoi (24%).

With 9% of the respondents replied yes, Davao City also ranked among those who have eaten marine turtle eggs and meat. Bangkok registered 7% and Beijing had only 3%. Ho Chi Minh/Hanoi had the least: 2%.

Davao City, however, had the lowest rank among those respondents who were asked if they know that marine turtles lay their eggs on land: 77%. Beijing had 80%, Ho Chi Minh/Hanoi, 84% and Bangkok, 85%.

The respondents were asked on why they would contribute money for the establishment of a marine conservation fund. Forty-one percent from Davao said that “the marine turtle is an important animal and should be protected.” Beijing registered 48% while Bangkok’s was 39% while Ho Chi Minh/Hanoi settled for 34%.

Only six percent from Davao City believed that “marine turtles can only be protected through the collaboration of several countries.” In comparison, 10% believed in Bangkok, 19% in Beijing and 29% in Ho Chi Minh/Hanoi.

Sixteen percent of respondents from Davao City responded yes to this reason: “It is high time that the people in East Asia do something concrete about protecting the marine turtles since this is the center of illegal trade in the world.”

Both Bangkok and Ho Chi Minh/Hanoi registered the same figure (9%) while Beijing had the lowest: 4%.

In its conclusion, the paper said: “Conservation agencies could play a role by working with governments to set up trust funds in which public funds could be deposited with confidence.” It also said: “As incomes rise and governance improves, Asia’s ability to pay for conservation will increase.”

To end this piece, the statement of Senator Loren Legarda comes in hand: “(Marine turtles) are majestic creatures found throughout the country. However, because of poaching, theft of their eggs for commercial purposes, and destruction of their habitat, they are in danger of becoming extinct.”