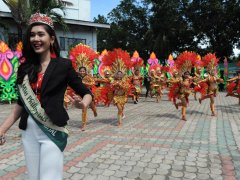 CAGAYAN DE ORO CITY, Philippines — Reigning Miss Earth Philippines-Fire 2017 Nellza Mortola-Bautista returned to her hometown to do what she loves most — advocate for the environment.

A native of Villanueva town in Misamis Oriental, Bautista was crowned last month along with four other pageant winners who form part of the “elemental court” of Miss Philippines Earth winner Karen Ibasco.

Returning to her hometown over the weekend after a series of environmental advocacies in Manila, Bautista said her focus would be to raise awareness on proper waste management among her townmates.

Bautista said she looks forward to working with local officials to fully implement existing laws on solid waste management “at the household level.”

For her part, Villanueva Mayor Jennie Rosalie Uy said Bautista’s advocacy could not have come up at a better time, pointing out that the local government is experiencing difficulties in garbage disposal.

Uy also noted that Bautista’s environmental advocacy would be a boon for Villanueva, an industrial town about 29.4 kilometers east of this city, that boasts of factories, processing plants and manufacturing firms.

To jumpstart the collaboration between the LGU and Bautista, Uy said she has already named the beauty pageant winner as the town’s “ambassadress for environment.”

Uy also praised Bautista for bringing honor to the town, noting that she was the only candidate from Mindanao who made it to the final round of this year’s Miss Earth Philippines.-Danilo Adorador & Jigger J. Jerusalem/PNA