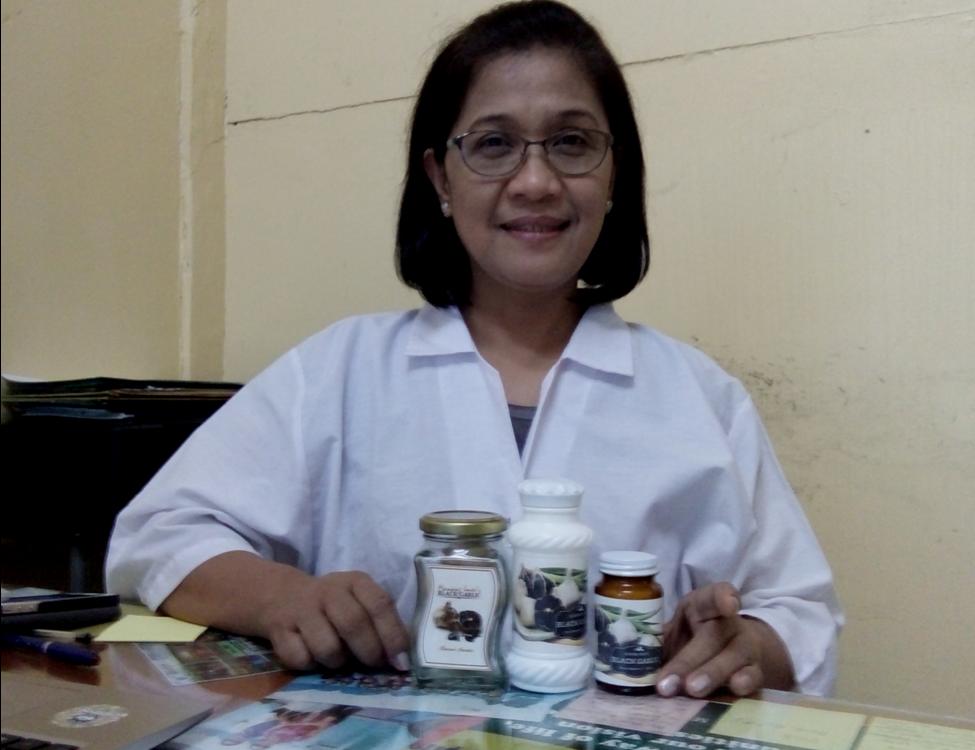 BATAC CITY, Ilocos Norte -– Black garlic (BG), a delicious and exotic product from fresh garlic, which is a sought-after food supplement and an ingredient of expensive culinary recipes in Japan and other countries, is now locally produced in Ilocos Norte.

This is credited to the efforts of Ilocos Norte Governor Ma. Imelda Josefa R. Marcos and Dr. Shirley C. Agrupis, Director of the Bioenergy Research Center of the state-run Mariano Marcos State University (MMSU), this city.

BG is an aged white garlic that is produced from the perfect mixture of heat and humidity for about 30 days without any additional treatments and additives. It is sweet with hints of balsamic vinegar or tamarind, but no strong offensive flavor of the original fresh garlic.

According to Agrupis, BG contains more nutrients than the fresh garlic (FG). Its antioxidants are 17 times higher than the FG and its amount of free amino acid is also 1.5 times richer than the FG. It also contains 18 other amino acids needed by the human body.

SAC, a sulfur containing amino acid derived from garlic, has been reported to have antioxidant, anti-cancer, antihepatotoxic and neurotrophic activity. During the processing of BG, SAC and other biologically important composites are synthesized and gradually stored. The final product has a fruity taste, with less irritating odor while various beneficial properties are increased.

Research also showed that the most abundant in BG is glutamine followed by asparagines, which explains the relatively abundant and more effective medicinal properties of BG than the FG.

Agrupis, who spearheaded the research on BG, said its popularization started in Ilocos Norte through the initiative of Gov. Marcos after the latter visited Japan and Taiwan in May 2015. While in those countries, Gov. Marcos saw the BG sold in many food outlets and thought that it was a genetically-modified variety. She was struck by the black color of the garlic bulbs and their high price which was equivalent of Php346 per bulb.

When Gov. Marcos returned to Ilocos Norte, she sought an audience with MMSU officials and asked: “What does it take to produce BG and why can we not do it in Ilocos Norte, the supposed garlic capital of the Philippines?” In that same year, Dr. Agrupis said the Ilocos Norte Black Garlic (INBG) was born.

In Japan, fresh garlic is processed into BG using a Black Garlic Fermenter, while in MMSU, it is processed using an ordinary drying oven that maintains a temperature between 65-80oC and humidity of 70-80 percent.

This process, according to Agrupis, is called Maillard reaction where the FG changed its color from white to brown and eventually become black after the month-long process. Also, its sugars are caramelized, while its pH (acidity) and moisture contents are also decreased as results of heat treatment.

Aside from Ilocos Norte, BG is also being produced in Korea, China, United States, Thailand and United Kingdom and is being sold as whole bulb, peeled or processed. In Britain, BG is sold at £3.50 per bulb or an equivalent of P226.14 per bulb. Other internet web sites are also selling BG at an equivalent of P1,600 per pack with a net weight of 500 grams.

“Considering the high selling price of BG, including its health and culinary benefits, a protocol and technology for production must be developed to determine the potential of the Ilocos garlic as BG,” she said.

Traditionally, the medical properties of garlic were recognized as early as 3000 BC. The functional benefits of this product are its anti-diabetic, antimicrobial, anticancer, and antioxidant activities, including its ability to reduce cardiovascular diseases and improving immune functions.

A daily consumption of garlic was proven to reduce the risk of oral, stomach, esophageal, colon, and prostate cancers because it contains at least 33 sulfur compounds responsible for the pungent odor and many medicinal effects. It also contains enzymes, 17 amino acids and minerals and phytochemical constituents such as saponins, tannins and alakloids.

Research showed that when FG is processed into BG, the amount of nutrients becomes higher, especially protein, carbohydrates, fiber, ash, sodium and calories. BG contains phytochemicals such as alkaloids, flavonoids, glycosides, quinones, steroids and phytosterols, terpenes, and terpenoids. Its protein and amino acid contents are much higher than the FG.

At 30 days of curing, BG has the highest phenolic content of 135.91 per gram and total flavonoid content of 2.74 per gram. Its free amino acid and antioxidant contents are 1.5 and 17 times higher than the FG, respectively.

Garlic is a high value crop in Ilocos Norte, which is the top garlic producer in the country. The province is contributing 67 to 70 percent of the total garlic production of the Philippines annually.

Records from the Office of the Provincial Agriculturist shows that Ilocos Norte is producing at least 6,855 metric tons of garlic bulbs yearly. The crop is planted during the dry season or just in time when farmers are done harvesting rice. In fact, it contributes 40 percent of the province’s gross domestic product and it is an effective tool for poverty alleviation, according to local farmers. (PNA)