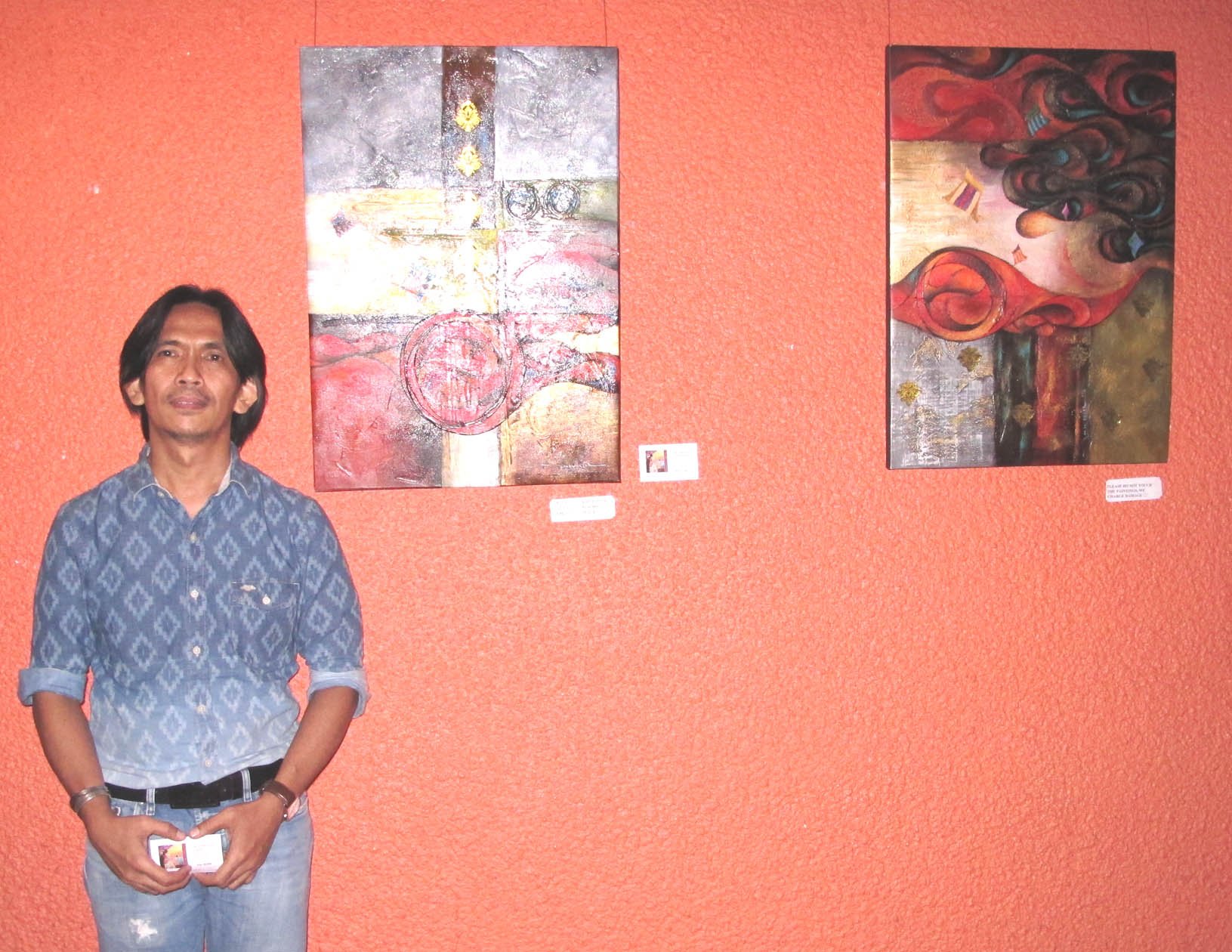 ZAMBOANGA CITY,  Philippines —  Tausug painter Rameer Amilasan Tawasil is using the canvass to bat for peace, drawing inspiration from his dark childhood marred by bloodshed and the chaos of the Moro rebellion.

For his masterpieces, Tawasil uses critical thinking to promote a common understanding of Mindanao in a bid to highlight the Moro people’s rich cultural heritage.

“I was once asked why I always paint peace-related themes since Zamboanga City is fairly peaceful. I tried to explain to them that it is like living inside a peaceful house and yet the surrounding neighborhood is always in trouble. One way or another, it will affect the over-all peace condition,” Tawasil told the Philippines News Agency.

“It is our responsibility to do our share to create a peaceful environment,” he noted.

A native of Sulu, Tawasil grew up at the height of the Moro rebellion during the chaotic years of Martial Law. At the tender age of six, he, along with his family, hurriedly left to safety in Zamboanga City as bombs dropped and wiped out the entire downtown Jolo, the province’ capital, in 1974.

“It was a painful experience,” he recalled.

It did not stop there, however. Soon after they returned to Jolo after the lifting of Martial Law, armed conflict again erupted. This time, it was a bloody feud between political clans in the island province.

The cycle of violence went on as the Moro rebels renewed their battle against government forces in Sulu.

“Those traumatic experiences led me to passionately work towards a peaceful Mindanao,” he stressed.

Growing up at this backdrop, the young Tawasil soon sought comfort through his sculptures and sketches.

It did not take long until some of his teachers in Zamboanga City and in Jolo noticed his talent.

From then on, Tawasil mastered the “ukkil” brush strokes, which is a form of Tausug carving done even before the Spaniards introduced Western painting in the Philippines.

“I learned a lot from my grandmother on my maternal side. I learned to appreciate Tausug art when I helped her make some patterns for her embroidery designs for ‘patajung,’” he said.

Patajung is a piece of cloth elegantly used by Tausug women in Sulu as an additional ornament.

He further developed his skills through the works of legendary late Tausug artist Abdulmari Imao, who went on to become the first Moro National Artist for Sculpture in 2006.

Tawasil came to learn about Imao’s works during his high school days in Hadji Butu School of Arts and Trade, where they both graduated.

“During my high school days, I was impressed by the mastery of Imao. His sculptures are being displayed in offices inside the campus. I got curious. One day, when I went home from school, I gathered some mud along the road. I experiment and throw some designs,” he recalled.

Several years passed, the two Moro artists eventually met during an exhibit in Manila sometime in 1996. Imao encouraged the young artist to further study the rich culture of the Moros in Sulu archipelago, and expose their masterpieces to the public.

“There is a need to let people outside of Sulu and Mindanao to appreciate our native art. In this way, people will learn about our culture and spread common understanding in this highly-diverse country,” Tawasil said.

As his mastery in art progressed, Tawasil did not stop from painting the rich culture of the Tausugs and Badjaos as he went on to put more twists and intrigues in his art works. Exhibits after exhibits, Tawasil’s works always connote his visual commentary of issues in the society.

One of his prominent artworks is the 4×5 feet anti-war painting, entitled the “Burning of Jolo.” Wrapped in fiery red and dark yellow colors, Tawasil highlighted the suffering of a mother and child as bombs were being dropped in Jolo. The masterpiece was inspired from Spanish painter Pablo Picasso’s “Guernica.”

In his previous exhibit, Tawasil once admitted that he is using his “canvass as a statement against war.”

When viewing his artworks, one will observe the colorful yet strong messages on how authorities dumped the island provinces of Sulu and Basilan with ammunition and other life-threatening war machines instead of livelihoods and social services.

Entitling it as “Mindanao still (steel) life,” the 101.5 centimeters x 80 centimeters mixed media art painting showed the ironic gleams of his personal perception on what is happening in his home province. For instance, durian and mangosteen fruits are turned into hand grenades, an attack helicopter transformed into dragonfly, and instead of carabaos (water buffalo), Tawasil distorted it into tanks and armored-car.

There is also the brightly colored “ARMM Tricycle,” which connotes the undeveloped social economic status of the people affected by the cycle of armed conflict.

He also experiments by using other medium and images, such as the heart-wrenching painting of women selling “peace” hindered by guns stuck with PHP20 bills on their barrels.

Some of his exhibits also displayed the unfinished portrait of Moro National Liberation Front’s founding chairman and former ARMM Gov. Nur Misuari– depicting his failure to bring progress even after signing the peace agreement with the government on September 2, 1996.

There is also the undone painting of the Bud Dajo (Mount Dajo) massacre during the colonial occupation of the Americans in Sulu. Started in 2006 during the centennial commemoration of the massacre, the artwork never saw the lights of exhibit halls — just like those thousands of victims who have never achieve their quest for justice.

Although majority of his works cries the hideous and distorted images of war, Tawasil also offers the public the common activities of his fellow Muslim and common scenes in their communities — using an uncommon style and effect.

As a social peace activist, Tawasil conceptualized the iconic “peace dove” logo that has become a peace campaign symbol and being widely used by civil society groups during the Mindanao Week of Peace.

In 2011, he joined the delegation to revisit the centuries-old relations between China and the Sulu Sultanate in Mindanao. The visit came as China and Philippines were trading accusations over the territorial issue in the West Philippine Sea.

Tawasil presented to Chinese officials his artworks showing the rich political power of the Sulu Sultanate during a visit in Dezhou City in Shan-Dong province in eastern China.

The Chinese government invited him to help in a project to setup a museum in honor of Sultan Paduka Batara of East Sulu State, who died in China during an official visit more than six centuries ago.

In 2013, Tawasil led a group of artists in occupying the Normal Road in front of the Western Mindanao State University (WMSU) to call for a peaceful solution on the Sabah crisis, by literally covering the walls and the paved street with hues of various colors. The event was an attempt to send their message across to end the bloodbath in Sabah between Malaysian forces and the followers of the Sultan of Sulu.

Tawasil admitted that his being a social peace activist forms a huge part of his artistry.

He is set to mount an exhibit in Manila near Malacañan Palace next month.

“Right now, I’m focusing on the Badjaos. They have been marginalized. It is but fitting to let the public understand these beautiful people. They are great divers, sophisticated boat makers and very peaceful people,” Tawasil said.

He said at least 20 artworks are due to be displayed. Details of the exhibit will be finalized soon.

“I’m just hoping that I could contribute even a little to the realization of peace in Mindanao,” Tawasil said. (Darwin Wally T. Wee/PNA) #salam