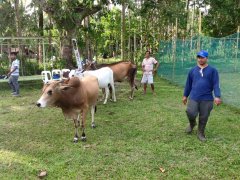 Mayor Noel Rosal, in an interview, said it was necessary for the city to also have an evacuation center for all the animals inside the permanent 6-kilometer danger zone and extended 7 and 8-kilometer danger areas to ensure their safety.

On Wednesday morning, Mt. Mayon spewed ash again, affecting the animals in  Legazpi City’s northern areas, which are part of the livelihood activities of the people residing near the volcano.

“We need to evacuate also those animals in a safer ground to protect the livelihood of the residents, being part of the source of their daily income,” the mayor added.

Rosal identified a one-hectare land in Barangay Padang outside the 8-km danger zone as evacuation center for animals. He said they would soon start advising the city residents presently housed in evacuation centers to bring their animals to the area.

Currently, the evacuees’ animals are left in their homes or fields. Some residents said they were forced to sell their animals prior to transferring to the various public schools in the city where they were now sheltered.

Rosal also revealed that based on the assessment of the City Agriculture Office, 75 farming families near the danger zone had suffered almost PHP1-million losses in production cost due to the ongoing restiveness of Mayon.