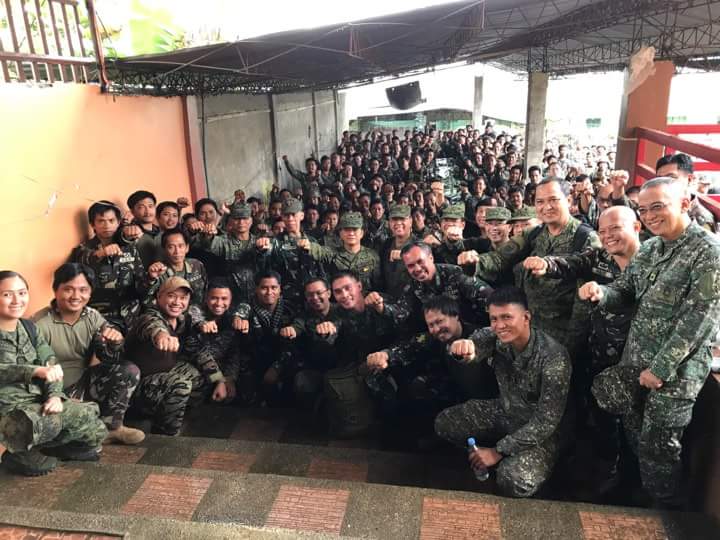 The visit of Año boost the morale of his soldiers fighting at the forefront to liberate the City of Marawi from the rampage caused by the Daesh-inspired Maute group.

Ground commanders briefed him of the situation to give him a clearer picture of what is going on in the main battle area.

In talking to his men,  Año stressed “Just like in game of basketball, we are already winning, but we should not rest on our laurels. We must be more motivated and more persistent.”

He added “Many among our soldiers want to be here to help, but not everyone is given this rare chance to be here, to fight .”

Reminding his men to be loyal to the country and the Filipinos , Año stressed “Just remember that what you are doing is not only for the country, but also for the future.”

“I am happy that we have the best officers and enlisted personnel who are fighting the terrorists. Stay safe, be bold, and daring, but be extra cautious. I want everyone to be alive when we finish this,” he added.

He also lauded the commanders, who will be receiving their personal Glock, for “a job well done.” He further advised the them to document the heroic deeds of the soldiers on the field so that appropriate recognition be given to them.

The overwhelming support of the nation to the soldiers is a thing that Año emphasized to his men “Donors are willing to give money and donations. In fact, a businessman gave a million each for the family of the fallen soldiers,” he added.

The AFP Chief of Staff joined the soldiers in a boddle fight and promised them that force protection equipment will soon be delivered to make sure that everyone has their own protective gears.

Lieutenant General Carlito G Galvez, Jr., Commander of the Western Mindanao Command said “It is very rare that the head of our organization would risk his life and come to the battlefield in order to meet and motivate personally his officers and soldiers.” “With his visit, we are all in high spirits,” said the WestMinCom Chief.

Año promised them that force protection equipment will soon be delivered to make sure that everyone  will have their own protective gears.

A boodle fight was hosted among men in uniform.-Richard Falcatan/Newsline.ph