Posted on August 22, 2017 by NewsLine Philippines 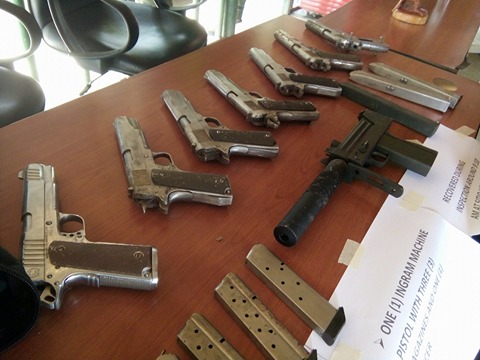 DAVAO CITY, Philippines— Personnel of task Force Davao manning the barangay Licanan, Lasang  checkpoint intercepted a bag with assorted firearms and ammunition  inside the compartment area Monday morning, August 21.
The Bachelor bus with licensed plate number WOY113  was carrying   27 passengers was undergoing  the routine inspection when authorities noticed a bag was placed in the compartment area.
TF Davao personnel looked for the owner but no one claimed, a reason they used the bomb sniffing dog as they started to suspect something must be inside.
The bag was isolated and when the bomb-sniffing dog approached the subject, he immediately  sat on the bag prompting TF Davao to ask for assistance from the Explosive Ordnance Disposal (EOD) team, which used water disruption, making sure any explosive device not to function.

Col. Erwin Neri told reporters they checkpoint has been inspecting every passenger and baggage entering the city which resulted to he discovery to the abandoned firearms.

The bus driver, Marcos Aninon, said he only had two stops during the travel – in Tacloban and Lipata, Surigao, where they accepted cargoes.

Aninon said he had other stops but only to  unload cargoes. As this developed, the bus passengers were brought to the Bunawan Police Station for questioning.

Of the 27 passengers based on the number of ticket issued, only 26 passengers appeared.

The police are now on the look-out for the 27th passenger.

Neri  said the  passengers profile will be checked against the photos of the persons of interest.– Editha Z. Caduaya/newsline.ph