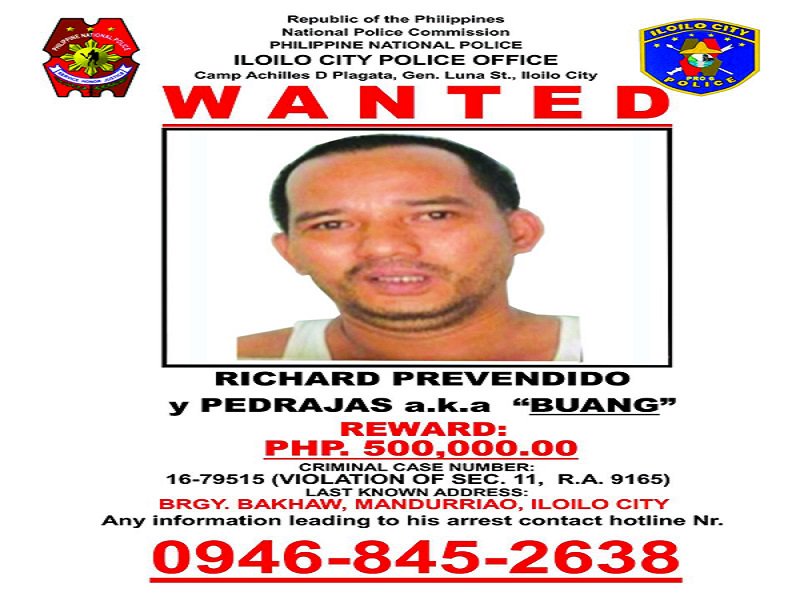 Prevendido, leader of the Prevendido Drug Group, had a PHP1.1 million bounty on his head.

The team, consisting of personnel from the Iloilo Police Provincial Office (IPPO), Iloilo City Police Office (ICPO) and the Police Regional Office 6 Intelligence Division, was supposed to serve Prevendido a warrant of arrest in his house at Landheights Subdivision, Barangay Balabago in Jaro district in this city when the incident happened.

“It looks like he has been staying here for a long time,” said Senior Superintendent Marlon Tayaba, IPPO director.

The warrant of arrest for violation of Section 11, Paragraph 1 of Republic Act 9165 otherwise known as the Comprehensive Drugs Act was signed by Judge Daniel Amolar on January 6, 2017.

Tayaba, who was one of the policemen who served the arrest warrant, said Prevendido was ready to engage the troops.

“Naka-ready na sila pagpasok pa lang ng tropa (They were ready as the team was entering),” he said.

Prevendido, who was with an armed unidentified male companion, allegedly fired at the police operatives, prompting the latter to retaliate.

Scene of the Crime Operatives (SOCO) were still at the crime scene as of this writing.

Police operatives were able to recover from Prevendido and his companion one AK-47 and two .45-caliber pistols.

Before the incident, police operatives scoured the mountainous areas of Janiuay, Lambunao, Anilao, Dingle, Barotac Viejo and Cabatuan towns in Iloilo in search of the drug lord, according to Tayaba.

His death came one year after suspected drug lord Melvin Odicta and his wife Meriam were killed at Caticlan Port in Malay, Aklan while on their way home to Iloilo from Manila.

The Odicta and Prevendido drug groups are said to be operating in Western Visayas. With the death of Odicta, Prevendido reportedly succeeded as the region’s top drug lord.

Prevendido’s death came days after the reassignment of Chief Inspector Jovie Espenido as officer-in-charge of the ICPO.- Perla Lena/Cindy Ferrer/PNA