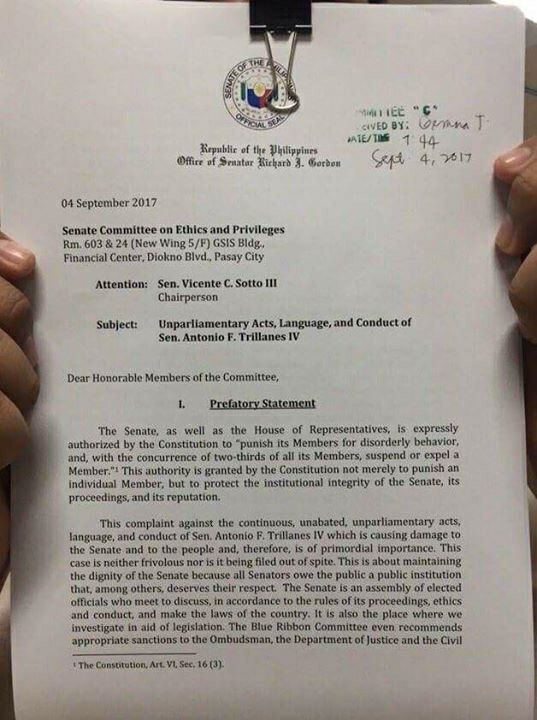 The complaint, which was filed at around 7:40 p.m., stemmed from a heated argument between the two senators during the August 31st Senate Blue Ribbon Committee hearing on the PHP6.4 billion worth of shabu shipment.

Trillanes insisted that Duterte and Carpio should be invited to clear their names and confirm or deny the earlier testimony of Customs broker and fixer Mark Taguba that the two had been involved in the illegal shipment.

Gordon replied with a “You may do so” but later described Trillanes’ basis to invite them as turning the Senate into “a cockpit of chismis (rumors).”

He then threatened to file an ethics complaint against Trillanes for being “out of order” and calling his committee a “committee de abswelto” (committee of acquittal).

In his 23-page complaint, Gordon cited five reasons.   First, Gordon claimed Trillanes “engaged in unparliamentary acts and uttered unparliamentary language and exhibited disorderly behavior in violation of law and rules of the Senate relating to ethics, conduct and/or demeanor during the 31 August 2017 hearing of the Blue Ribbon committee.”

Second, he pointed out that Trillanes “brazenly and maliciously” denounced Senator Vicente Sotto III and himself for allegedly trying to serve as “abogado” (lawyer) for Duterte and Carpio.

Third, Gordon claimed that Trillanes “lies unfairly and maliciously” accusing Sotto and him of “bias and partiality” by calling Duterte and Carpio “sacred cows” for not being invited.

Fourth, he said that Trillanes called his entire committee as having “bias and partiality” particularly when he said that Gordon was doing “a one-man show” or a “monologue for several hours.”

Gordon said Trillanes also “arbitrarily and capriciously” used language offensive against Sotto and himself by saying that they were badgering the witness, Taguba, when he was the one doing so.

Finally, he said Trillanes “openly, publicly and malicious uttered insulting words and statements” against him threatening to expose irregularities involving the Philippine Red Cross, a humanitarian organization where Gordon sits as chairman and chief executive officer.

Meanwhile, Gordon mentioned other instances where Trillanes was unbecoming such as the time he described the Senate as “one of the most damaged institutions in the government.”

Gordon also cited the time Trillanes removed self-confessed hitman Edgar Matobato from the Senate premises without the knowledge of the Senate Justice Committee last October 3, 2016; the time he insulted former Senator now Foreign Affairs Secretary Alan Peter Cayetano by turning off his microphone while he was speaking in a previous hearing last September 15, 2016; a near fistfight he had with Senator Juan Miguel Zubiri after he accused Zubiri and Gordon oft attempting to whitewash the investigation on Bureau of Immigration officials on January 17, 2017; and Trillanes’ involvement in two coups d’etat in July 27, 2003 at the Oakwood Premier in Makati City and on November 29, 2007, at the Manila Peninsula Hotel, among other reasons.

“I most respectfully restate my request that this Committee conduct an investigation on the unparliamentary conduct and disorderly behavior or Sen. Antonio F. Trillanes IV to the end that he be penalized accordingly,” he said in his complaint.

Trillanes, for his part, said he was ready to face the ethics complaint describing it “premature” for Gordon to say that 10 to 14 senators supported his complaint.