‘Shaded’ SALN not in accordance with CSC guidelines 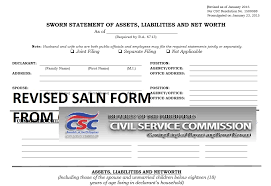 MANILA,  Philippines —  An official of the Civil Service Commission (CSC) on Wednesday said redacted or shaded portions of the statement of assets, liability, and net worth (SALN) of some cabinet members are not in accordance with the commission’s guidelines.

“Yun pinakita nilang sample pati amount ng properties ay shinade nila (Even the amount of properties was shaded in the sample SALN shown). Apparently, that’s not in accordance with the guidelines,” Assistant CSC Commissioner for Legal Affairs Ariel Ronquillo told reporters in an interview at the Senate.

“Sa guidelines na in-issue namin, ang pwede lang i-shade ay yung address ng filer (In the guidelines we issued, the only portion that can be shaded is the address of the filer). The rest should be open to the public,” he added.

Ronquillo made this statement after Malacanang defended its decision to redact portions of Cabinet members’ SALN saying it was in line with the Data Privacy Act.

“Yun yata ang naging interpretation nila dun (That might have been the Executive’s interpretation) because of the Data Privacy Act. Although we have taken the position that the SALN should not be covered by that because SALN is an instrument of transparency,” he said.

The CSC official said that it was necessary for all government personnel to show how they accumulated their wealth.

“Dapat walang itinatago diyan (They should not be hiding anything). Dapat we are ready to show the people how we accumulate our wealth while we are working in government. Para sa kaalaman ng lahat na hindi natin ginagamit ang ating position to unlawfully enrich ourselves (This is to let everyone know that we’re not using our position to unlawfully enrich ourselves),” the CSC official said.

“We have to remind them that these are instruments of transparency and therefore should be made available for inspection upon lawful request.

Ronquillo, however, said that the shading of portions of the SALN cannot be immediately attributed to the cabinet members’ doing.

He said there is a need to find out who performed the shading of portions of the SALNs.

“Kailangan maimbestigahan kung sino yung nag-shade (There needs to be a probe on who did the shading). At this point we cannot make a conclusion without the conduct of an investigation,” Ronquillo said.

Based on the SALN guidelines, Ronquillo said that the Commission checks whether the declaration is complete and is its proper form.

He said that it was also worthwhile to determine how the other agencies worked.

“Hindi natin alam kung ano naging kalakaran nila dun sa ahensiya nila. Kasi merong hierarchy of positions. Yung mga nasa lower positions taking orders from the top. Pero wala po tayong idea kung anong nangyari doon (We don’t know how it works in those agencies. Because we have what we call a hierarchy of positions. Those in lower positions taking orders from the top. But we have no idea what is happening there),” he added.

At present, he said that he has not received any reports of complaints filed against the Cabinet members.

Ronquillo, however, said that the CSC does not have jurisdiction to mete out disciplinary action against Cabinet members.

“If there are any complaints it might be referred to the proper office which has disciplinary jurisdiction over them. It could be the Ombudsman, it could be the Office of the President,” he added.

According to Ronquillo, administrative and criminal penalties can be imposed against those who have violated the law. – Azer Parrocha/PNA