Duterte thanks Japanese envoy for service 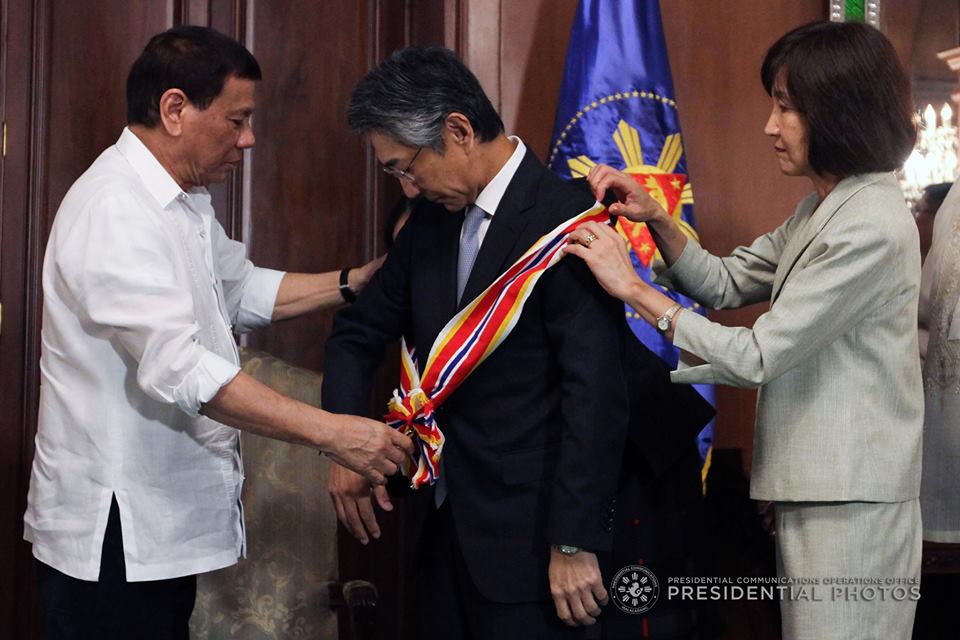 MANILA,Philippines  – President Rodrigo Duterte thanked outgoing Japanese Ambassador to the Philippines Kazuhide Ishikawa for his service in the country on Tuesday, October 3 at the Palace.

Ishikawa was appointed Ambassador to the Philippines in August 2014  paid an exit call to Duterte  as he  concludes his stint as Japan’s top diplomat in the country.

Duterte conferred  Ambassador Ishikawa  the Order of Sikatuna with the rank of Datu.

The Order of Sikatuna is an order of diplomatic merit conferred upon individuals who have rendered exceptional and meritorious services to the Republic of the Philippines and is one of the senior honors of the country.

It is awarded to diplomats, officials, and nationals of foreign states who have rendered conspicuous service in fostering, developing, and strengthening relations between their country and the Philippines or upon personnel of the Department of Foreign Affairs (DFA), both in the home office and in the foreign service.

Duterte thanks Ishikawa and the Japanese government for their continued support to the country with good diplomatic relations as he expressed high respect to the Emperor.

With Ishikawa’s exit, Duterte expects that the Japanese government  will be  sending someone who is equally capable as the outgoing envoy.-Editha Z. Caduaya/Newsline.ph