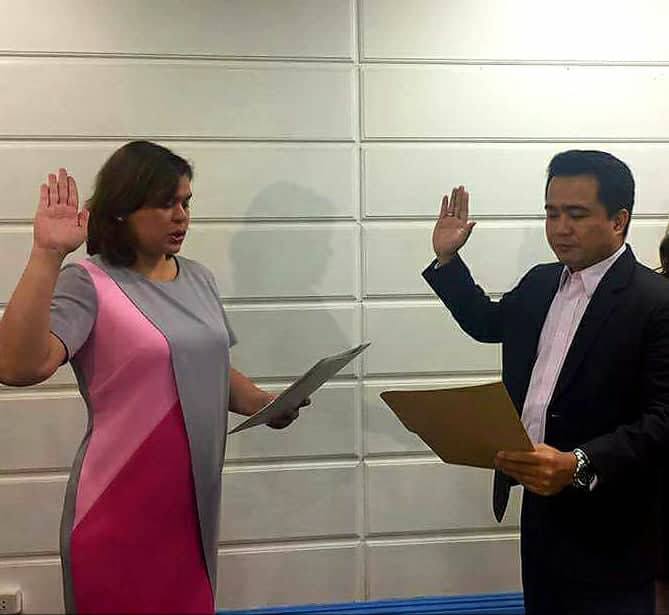 It can be recalled that Duterte asked Al-ag  to preside the remaining minutes during the December 25 Special Session to  deliver  his privilege speech announcing  his resignation as the City Vice Mayor.

Al-ag  was among those who persuaded Duterte not to push  for his resignation “Because I know the people of Davao wants him to be the Vice Mayor, but everything is history now, VM Pulong is still our Vice Mayor even if he resigned already, in our hearts… he is still the Vice Mayor Pulong.”

Duterte and Al-ag have been working closely as the later served as majority floor leader of the City Council during the last four years, they sometimes spent sleepless nights  when important things need to be done.

The exchange of messages

Al-ag who admitted he is overwhelmed with the challenge of his new posts  told Newsline.ph  that an hour before he took his oath he texted Duterte  “Thank you for all the good things which you have done for the people of Davao as our Vice Mayor, you will remain my and the vice mayor of the City Councilors, thank you for the trust you gave me as the majority floor leader, thank you so much.”

With his new posts Al-ag said he lost his friend and a  party mate in  at the City Council  but “I am challenged and overwhelmed with my new tasks but I am sad because Vice Mayor Pulong is no longer there with us but I have to  face the new challenge, I will continue the good things that the Vice Mayor has started.”

Duterte, according to Al-ag was instrumental in honing his skills as a legislator “For four years he trusted me as the Majority Floor leader which prepared me to this new role, Pulong and the Duterte’s helped me from the start of my political career and even until now.”

Changes in the City Council

A major reorganization is expected, Al-ag revealed “We have to elect our new majority floor leader and the chairperson for the Committee on Rules, Laws Privileges and Ordinances, these committees I previously handled”.

A caucus is scheduled among members of the council anytime this week.

The weekly media forum of Duterte dubbed as “Pulong Pulong ni Pulong (PPP) will be continued as Al-ag said it is a legacy of Vice Mayor Duterte.

The Al-ag brothers come from the vote-rich Toril district this city. They recorded not defeat in an elections.

Vice Mayor Al-ag, a physician by profession, started his political career after his elder brother Wigberto finished his three-consecutive term at the City Council undefeated.

After his term, Wilmar’s wife Lilibeth succeeded  the post and is serving her second term as barangay captain.

Al-ag  was serving his last term of office as City Councilor when he succeeded as Vice Mayor.

Al-ag’s ascension to the vice mayor’s post was brought about by the resignation of Presidential son Paolo Duterte on Dec. 25.