Men, women in ‘robes’ urged to be role models 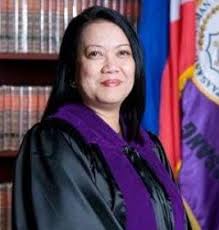 MANILA, Philippines  — Chief Justice Maria Lourdes Sereno urged justices and judges to serve as good role models by personally observing high standards of conduct while upholding the integrity and independence of the judiciary.

Sereno, in a statement, said it is high time for judges to live up to their role as dispensers of justice guided by a strong set of ethics and values.

Sereno said the magistrates should focus mainly on how they could address the problem of injustice, which was a major concern among people.

“In other words, let us use a language that is honorable, noble, wise and upright. Let us talk of goodness, honesty, righteousness, justice and truth,” she said.

“‘Yan dapat (That’s our) ang language natin because we are trying to lift a culture, we are trying to create system improvements, we are trying to support institutions na hindi lang para sa ngayon (not just this time). If we’re trying to assure a good future for our children and apos (grandchildren), it must be only that way,” Sereno added.

The country’s top magistrate said she envisioned a generation of judges who would be leaders in their communities.

In dispensing justice, Sereno reminded judges that it was not all about them, but the “individuals seeking justice.”

“You should not be emotional, but you have to show your heart – that your heart is in the right place,” she said.

“It’s for the little man, it is for the oppressed man, it’s for those hard-earning people burdened by so much delay and dishonesty,” she added.

At the same time, Sereno said there was nothing wrong with magistrates going out in public but it should be for the purpose of sharing the reforms that had been put in place to ensure a swifter and easier access to justice for Filipinos.

“Ang kailangang tanggalin talaga ay ang misteryo tungkol sa proseso ng hudikatura upang maintindihan ng mga tao kung ano ang ibig sabihin ng due process (We need to remove the mysteries about the process in judiciary so that the public will understand the meaning of due process),” Sereno explained when asked if it was right for magistrates to reveal to the public and ignore the sanctity and confidentiality of court deliberations.

Since she took the helm at the Supreme Court in 2012, Sereno pursued judicial reforms to achieve her goal of bringing justice to people’s doorsteps.

These include the establishment of small claims courts, conduct of continuous trial for criminal cases, enforcement of court decongestion program called Hustisyeah!, and the implementation of electronic courts or eCourts and automated hearing projects.

Sereno said magistrates should accept the fact that they had to live a “semi-monastic life” in order to maintain their independence and protect themselves from outside influence.

“Medyo reflective talaga ang buhay mo [as a judge] at dapat ihiwalay mo ang sarili mo in having political and financial interests and too much of what is happening outside,” she said. –Christopher Lloyd Caliwan /PNA