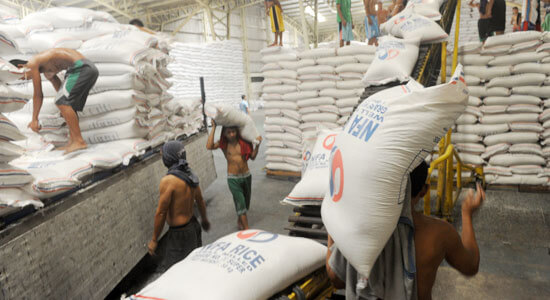 DAVAO CITY, Philippines —  Authorized distributors of the government’s  National Food Authority (NFA)  rice are running short of their stocks as the agency’s regional office limits the sale.  NFA retailers who refused to be identified said that the NFA regional office reduced their supply citing low inventory.

Tata, an authorized NFA rice retailer at the Agdao public market revealed the NFA regional office reduced their supply  during the last two weeks “We were told that the warehouse inventory is running out, so they limit their distribution.”

Merlita, an NFA rice outlet in Bankerohan revealed  “Gipagamyan man ang among stocks kay gamay na lang daw ang stock sa bodega nila.” (They reduced our stocks because they do not have stocks in their warehouse).

NFA Davao Manager Leonila Selpa admitted to have limited the selling of NFA rice in Davao City markets due to low inventory.

Selpa revealed  their warehouses only have 35,929 bags of rice as of Wednesday that would be enough to last until the next delivery of stocks.

The NFA implemented a fix scheme of distribution every week.  It was used to provide 40 bags to some institutional agencies, the major market retailers with 30 bags while minor retailers are allocated with 20 bags. Retailers outside of the market are given 10 bags  and the Bigasan sa Parokya outlet or church-based retailers are now given also 10 bags.

Davao City accounts to 210 accredited retailers, 131 of them are outside the market, 66 retailers in the market while 13 are church-based retailers.

She however refused to refer to it as a rice shortage saying  the NFA rice is still visible and accessible in the markets to serve the poorest of the poor.  Other regions have already stopped selling the NFA rice because of low inventory.

Selpa said the NFA also wanted to retain buffer stocks that would be used for an emergency in case of calamity. “We give priority to relief operations and supplemental feeding programs,” she said.

The NFA prioritizes the supplies for the Department of Social Welfare and Development (DSWD), Bureau of Jail Management and Penology (BJMP), Disaster Risk Reduction Management Offices (DRRMO) and Local Government Units,” she added.

According to her, the NFA General Manager Jason Aquino is recommending to the NFA council for the importation to replenish the rice supply

On Thursday, Malacanang allayed fears of possible rice shortage, saying 325,000 metric tons will arrive soon to beef up the National Food Authority (NFA) rice supply.Presidential Spokesperson Harry Roque said Cabinet Secretary Jun Evasco, who chairs the inter-agency NFA Council, had told him there was no reason to push for standby authority to import additional 250,000 metric tons since 325,000 metric tons of rice would arrive within the month.

It can be recalled that Aquino and Agriculture Secretary Emmanuel Piñol assured the public that the local rice production is enough to supply the rice requirement of the country.-Editha Z. Caduaya/Newsline.ph