Posted on January 20, 2018 by NewsLine Philippines 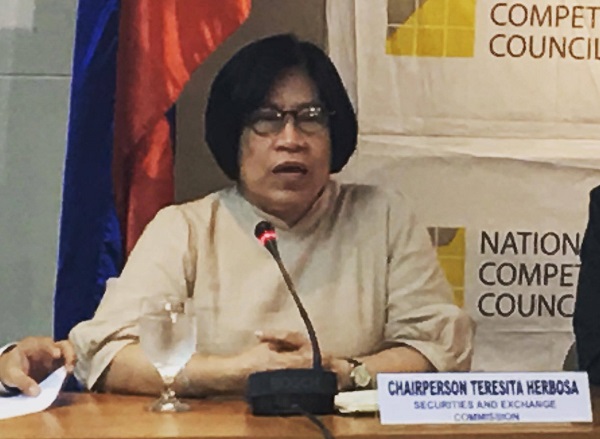 DAVAO CITY, Philippines — The Securities and Exchange Commission (SEC) chair Teresita Herbosa challenged online news agency Rappler to prove that the cancellation of their certificate of incorporation was  politically motivated.

Teresita Herbosa, SEC chairperson claimed “Whoever didn’t get what they wanted from us, maybe they wanted us to say the PDRs were legal, then maybe they have their own agenda.”

Herbosa accused Rappler “They have to resort to things like that in order to divert people’s attention to what is the real issue.”

Rappler Chief Executive Officer Maria Ressa, however, said the SEC did not give them time to rectify the problems with their PDR’s unlike other business entities.

Ressa and several media entities viewed the SEC decision as an affront to press freedom.

Herbosa said Rappler engaged in fraud and circumvented the constitutional ban on foreign ownership in media by accepting over $1 million (around P50 million) from a foreign investor, Omidyar Network, in the form of Philippine Depositary Receipts or PDRs.

A PDR is a financial instrument that foreign entities can buy into for financial returns in a local company, but not in the form of dividends, which are tied to ownership.

Ressa accused Malacañang of influencing the SEC decision as evident in the letter of Solicitor General Jose Calida in November 2017 asking the agency  for a review of RAPPLER’s SEC registration.

Herbosa confirmed it was Calida who asked SEC to look into Rappler’s ownership after it made public about their investors.

Last Tuesday, January 16, President Rodrigo Duterte denied having a hand in SEC’s decision but he called the online new agency a maker of “fake news.”

Ressa said she will put up a legal fight and stand with their ground to protect and defend Rappler.