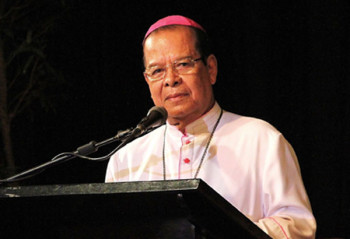 MANILA, Philippines—Catholic Bishop Conference of the Philippines (CBCP) former president Monday criticized the alleged giving away of Bibles along with relief goods at evacuation centers for the Marawi siege refugees.

In a statement published at the CBCP news website, Davao Archbishop Fernando Capalla, who once served as CBCP president from 2003 to 2005  said the act is contributing mention among Christian and Muslim residents.

Capalla said in this time of crisis, people should be more sensitive and should have asked the Muslim leaders what to donate in the areas of religion.

An unknown donor of relief goods included in their package copies of Bible and translated in Maranao language, an act which drew the ire of Muslim residents and religious leaders.

While the conflict between government troops and Maute group is ongoing, Capalla implied people should be more sensitive to this culture and needs of the people.

Capalla added that “proselytizing” shows lack of respect and calls into question the sincerity of one’s charity.

“If they do it deliberately, it’s either an insult or ignorance of the needs of the Muslims,” he said in an article posted on the Catholic Bishops’ Conference of the Philippines (CBCP) news website.

Capalla who sits as co-convenor of the interreligious dialogue called the Bishop-Ulama Conference (BUC) urged the donors “If you want to help, then give only the needs of the Muslims… the basic needs like clothing, food, water, among others.”

Last Friday, July 7, 2017, Christians and Muslims pray together for peace in the country during a service at the Amoranto Theatre in Quezon City.

Amid the ongoing crisis Marawi City, Christians and Muslims come together in Quezon City to pray for peace and show support.

It was a simultaneously activity held across the country at 12 noon and initiated by the Pasa Lord Movement, an organization of different religious denominations.

The Pasa Lord Movement is composed of representatives from various faiths and denominations, including Catholics, Muslims, Protestants, Evangelicals, and Charismatic Christian groups.-Editha Z. Caduaya/Newsline.ph with report from CBCP news