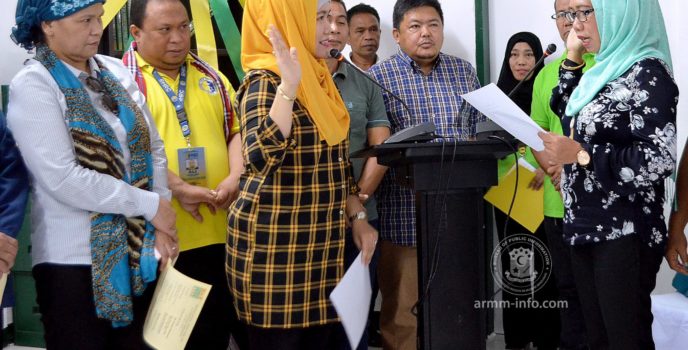 DAVAO CITY, Philippines — The Autonomous Region in Muslim Mindanao (ARMM) has a new Secretary to head the  Department of Agrarian Reform.

Jumaide who took her oath and  assumed  office on Tuesday October 3, 2017.

Alamia said the ARMM leadership is “Confident that Secretary Jumaide will serve the agrarian reform partners’ interest in our region.”

Sangcopan, Anak Mindanao Partylist 3rd nominee for the House of Representatives, took the place of Rep. Sitti Djalia Turabin-Hataman who stepped down from the House on Oct. 2.

In a statement, Jumaide said “It’s a new challenge for me but I assure you that DAR-ARMM will continue to implement, facilitate, and coordinate the delivery of support services to the agrarian reform beneficiaries.”

“Let us sustain the gains and bring in more reforms, let us see to it that the lives of our beneficiaries are exponentially blessed and enhanced beyond the ordinary,” she added.

Sangcopan has only good words for Dayang “I wish her the best. Hope you’ll find it an honor to serve our farmers in ARMM. I did that for 30 beautiful months. Congratulations.”

Jumaide rose from the ranks, she started her government service as staff nurse at the Datu Alawaddin Bandon Sr. Memorial Hospital in Tawi-Tawi (1993-2000),health information officer in the same province (2000-2006), project officer of the US Agency for International Development (2006-2010), and regional assemblywoman.

Municipal Agrarian Reform Officers (MARO) turned over  the department’s banner and key of responsibilities to the new DAR-ARMM chief. They also handed over a transition report, a personnel inventory and property plan, and an equipment report.

DAR-ARMM has been consistent in achieving 100 percent compliance to the Seal of Transparency and open-government partnership.