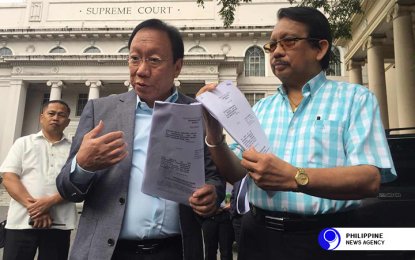 MANILA, Philippines — The Office of the Solicitor General (OSG) on Thursday filed a manifestation before the Supreme Court (SC) seeking to order the Office of the Ombudsman to file homicide charges against former President Benigno Aquino III and former police officials over the January 2015 Mamasapano clash that resulted to the death of more than 60 people, including 44 members of the elite Philippine National Police-Special Action Force (PNP-SAF)

On the third anniversary of the bloody clash, Solicitor General Jose Calida and Presidential Anti-Corruption Commission Chairman Dante Jimenez – former chair of the Volunteers Against Crime and Corruption (VACC) -filed before the high court a manifestation in support to the petition filed by two relatives of the slain members of the police elite force.

“While the mandate of the OSG is to represent the government and its officers in this Honorable Court, the Court of Appeals and all other Courts or tribunals in all civil actions and special proceedings in which the government or any officer thereof in his official capacity is a party, it is also incumbent upon it to present to the Court the position that will legally uphold the best interests of the government although it may run counter to a client’s position, the Ombudsman’s in this case,” Calida said in his 45-page manifestation.

In November last year, the Office of the Ombudsman indicted Aquino for usurpation of official functions under Article 177 of the Revised Penal Code and violation of Section 3(a) of the Anti-Graft and Corrupt Practices Act.

Aside from Aquino, he also wanted Purisima, and Napeñas be charged with 44 counts of reckless imprudence resulting in homicide.

They insisted that the liability of the respondents over the Mamasapano carnage was grounded on the faulty planning and execution of Oplan Exodus.

On Jan. 25, 2015, the slain police commandos were deployed to Mamasapano to capture the said terrorists.

Calida further explained that it was criminally imprudent on the part of Aquino to acquire and leave the intelligence, planning, control and command of the operation to Purisima as he was suspended at the time and had no legal authority over the entire PNP.

“To iterate, respondent Aquino’s criminal negligence consists in his active participation and direct involvement in the whole process as he helped plan Oplan Exodus with gross inexcusable negligence and approved the whole operation with full knowledge,’ the solicitor general said.

He added that Purisima and Napenas both admitted in the Senate inquiry on the clash on the full participation and approval of the former president of the operation, adding that as President, Aquino is “ultimately responsible for the success or failure of the operation.”

Calida pointed out that Aquino allowed Napeñas to push through with the operation under suspended Purisima.

“As the PNP (Philippine National Police) is under the DILG, the President, as the Chief Executive, exercises supervision and control over it. Thus, given that the President gave the policy direction to arrest Marwan and Usman, and that he approved Oplan Exodus with full knowledge of its operational details, the Chief Executive is ultimately responsible for the success or failure of the mission,” Calida added.

Aquino posted a PHP40,000 bail last November before the Sandiganbayan even if the anti-graft court has yet to issue an arrest order for him.

Aquino had insisted that the botched operation was not his fault and accused Napeñas of disobeying his orders to coordinate with the military. (PNA)