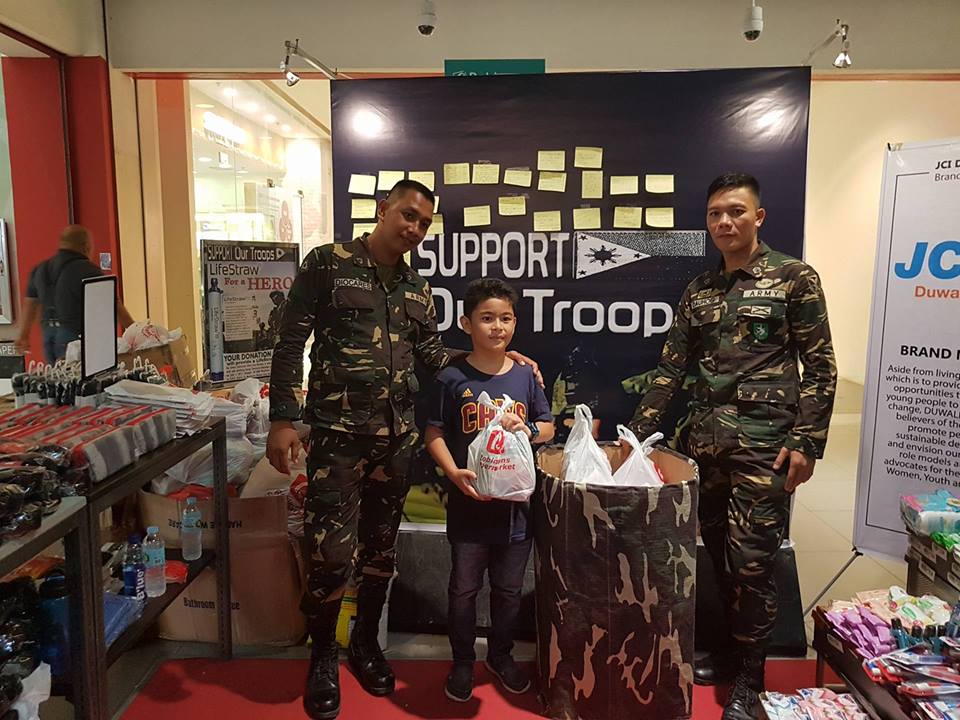 DAVAO CITY, Philippines— In an effort to show support and care to fellow troopers fighting in Marawi,  soldiers here launched a campaign among  Davaoeños to donate personal items, personal items,  goods and food stuff to uplift the morale of their comrades in the frontline .

In a campaign dubbed “Support our Troops” , the 10th CMO Battalion encourages well-meaning citizens, socio-civic groups, businessmen and non-government organizations to donate a stuff by buying any items they deem needed by  soldiers from the mall and donate the same to the counter inside the Robinsons Mall at the Abreeza where soldiers are stationed.

The mall, put up a mini-shop selling stuff deemed needed by the soldiers, a donor buys the stuff and after paying, they will drop the same to a huge box and soldiers account every donation and turn-over the same to the 10th CMO.

The initiative, according to Capt. Andre Cabales of the 10th CMO, “is to uplift the morale of our fighting comrades that we are supporting them in the best way we can, from Prayers to logistics.”

Cabales said the campaign was conceived after the delivery of second relief goods for the Marawi soldiers “It was like a consensus among soldiers who were there to launched a drive for the troopers, though the government is providing the basic provisions for the soldiers, we, the soldiers know that they have their personal needs which the government cannot supply, so we decided to launched a campaign to show them we care.”

“We know that the soldiers do not have time to buy for their personal stuff. Since the Marawi fight started every shop is closed. So, we decided to launched this campaign and provide their personal and basic hygiene needs,” he added.

According to Cabales, the items are categorized into three: the personal hygiene which include shampoos, soaps, toothpastes, toothbrushes, etc; the operational items, which include socks, boxers, pain relief patches, powerbanks, mosquito repelants,  lotions; and comfort items, which include chocolates, coffee, canned goods, cigarettes and facial cleansers.

Any item donated will be turned over to the First Infantry Division of the Philippine Army in Marawi, as the division is overseeing the operational unit of the Marawi crisis.

“A STRAW for a HERO” Aside from the personal items and foodstuff, Cabales said they are campaigning to soldiers to has safe drinking water buy acquiring “LifeStraw water filter”.

Having a LifeStraw water filter will help the fighting soldiers as it makes microbiogically contaminated water safe for drinking.

In a call for help in purchasing the life straw the 10thCMO Battalion posted on Facebook “We are forging an arrangement with R.O.X. Philippines who is the only distributor of this product in the country to make available all their units for our troops in Marawi. We are also knocking on your hearts to help us procure this product for the gallant men defending freedom in Marawi.”

But Cabales said they are also asking well-meaning citizens to donate “LifeStraw” for the purpose.

One soldier described these filters as “gold to our dear soldiers fighting in Marawi.” But it is a bit costly and there is only one distributor in the country, R.O.X Philippines. It currently retails at P990 for a sale price.

On the first day of the campaign last Saturday, June 24, Cabales noted “well-meaning citizens donated about P100,000 worth of  personal items and stuff.

“It is our way of telling our comrades in Marawi,  We are with you, we are one in the fight  against terrorism and above all, we care for them,” Cabales added.

Davaoeños,  immediately responded to the call and shared their blessings.

The campaign is ongoing and any donation is welcomed. The campaign ends in June 29, Cabales added.

Any donation is accounted to ensure every stuff is delivered to the troops in Marawi.

The 10th CMO battalion expressed sincere gratitude to the donors who shared their blessings to the fighting soldiers. -Editha Z. Caduaya/Newsline.ph