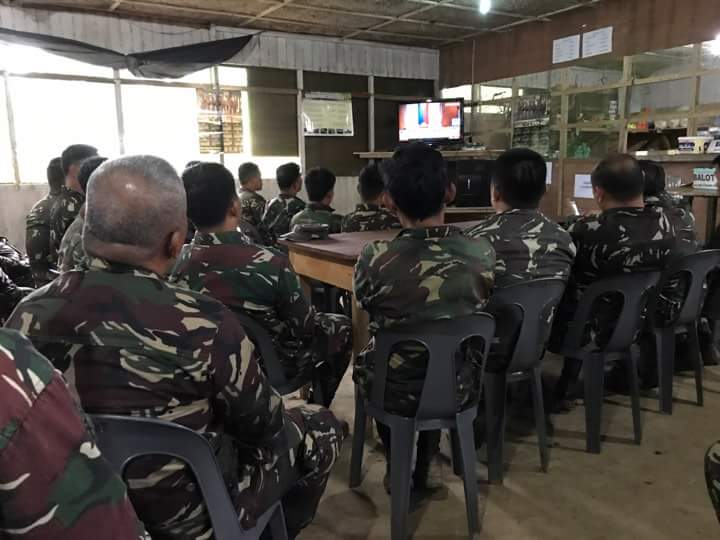 MARAWI CITY, Philippines— With gunfires as  background,  resting soldiers in Camp Ranao, Marawi City  were glued on television Monday to watch their commander-in-chief deliver his second State of the Nation Address (SONA) Friday.

The Joint Task Force Marawi in a statement said  “Soldiers of the Joint Task Force Marawi watched the 2nd State of the Nation Address of President Rodrigo Roa Duterte as the Commander-in-Chief, who vowed to strengthen the capability of the Armed Forces of the Philippines and help the people of Marawi City in the midst of the all-out military offensives against the Daesh-inspired group in the city.”

Capt. Joan Patinglay of JTF said “The President’s statement of support to the AFP, uplifted the morale of the troops and left them more motivated and determined in fulfilling their mandate to protect the country’s sovereignty, including the liberation of Marawi City from terror.”

Photos and Video from JTF Marawi.

The President in his SONA reiterated his full support to the government troops and their families.

In his speech, Duterte emphasized “As president, I am reiterating my unwavering support and commitment to the soldiers of our Armed Forces and the members of our police force — [applause] those who are on the ground and in the battlefields and those who are risking their lives for our country and our democracy. I have your backs. To those who oppose and think that all these efforts are out of order, I hold myself — me and me alone should be responsible. [applause]”

Duterte called on the Filipino people saying “The people of Marawi need help. Caught in the crossfire between government troops and Muslim extremists, they have been through hell and we need to help them rise and move forward.”

Last week, Duterte visited the government troops in Camp Ranao, Marawi City saying he needs to be with his soldiers who are willing to die for the country.-Richard Falcatan/Newsline.ph