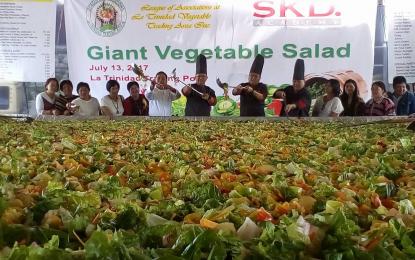 BENGUET, Philippines —  A total of 176 kilograms of fresh fruits were served to around 1,000 people at the largest fruit salad event held here Monday in time for the town’s 3rd Fruit Festival.

Sablan, the fruit basket of the province, launched the event as the highlight of the three-day festival that ended Monday.

With a budget of PHP17,000, Agricultural Technologist Arthur Mariano, who co-chaired the preparations of the festival, said 10 fruits that thrive in the area were served on a four-inch serving bowl prepared for the event.

At least 18 kilos of bananas, 25 kilos of cucumbers, 13 kilos of pomelo, 22 kilos of papaya, 45 kilos of pineapple, 16 kilos of guavas, 20 kilos of jackfruit, 13 kilos of rambutan, and four kilos of dragonfruit and santol were served.

The fruits were served without any dressing — to allow the public to taste and enjoy the natural flavors.

Mayor Arthur Baldo said this is the first time a fruit salad event was held in the town and hopes to make it Sablan’s brand.

“Sablan will no longer just be a stop-over of buses to and from Baguio City for comfort needs, but will soon be visited because of the fresh and delicious fruits which are sold and produced by the local farmers,” he said.

The mayor said all the fruits used were sourced from local farmers from Sablan’s eight barangays.

The local government broached the idea of coming up with the event following the other municipality’s success in featuring their own products — such as the largest strawberry shortcake of La Trinidad and the giant vegetable salad spearheaded by the La Trinidad Vegetable Traders Association.

Baldo said on its third year, the festival has proven to have a positive effect to the livelihood of the residents, encouraging more of them to plant and produce fruits of different varieties.

During the opening day on September 2, a contest for the largest fruits and sweetest fruits were also conducted, aside from the agricultural trade fair, float parade featuring the town’s fruits, poster making, wall painting and ground demonstrations.

Baldo said the town’s fruit festival was held this month because most fruit varieties are in season during August and September. -Liza Agoot/PNA