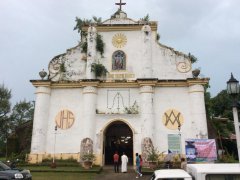 LAOAG CITY, Philippines  — The Diocese of Laoag and residents of Piddig town look forward to the full restoration of the 207-year-old St. Anne parish church in the Ilocos Norte town about 30 kilometers from this city.

Fr. Carlito “Joey” Ranjo Jr., spokesperson of the Diocese of Laoag, said Friday it took about two years for restoration experts to study the structure and materials used to determine the right approach to fully restore the church.

After the conduct of several digging operations in the church wall and some parts of the church compound, Ranjo clarified these were all part of the process contrary to allegations that the excavation was due to treasure hunting.

“We hope the church restoration will start this January as the National Historical Commission of the Philippines already approved an initial funding of Php 50 million,” said Ranjo.

In September 2014, the St. Anne parish was closed due to structural problems and was deemed unfit for occupancy.

A month later, local officials of Piddig town initiated steps to declare the old church as a heritage structure.

Said initiative was endorsed by Ilocos Norte Rep. Rodolfo Fariñas, prompting the NHCP and the National Commission for Culture and the Arts (NCCA) to allocate some funds for the restoration of the church.

Nestled on top of a hill at the town’s central business district, the St. Anne parish was founded by the Augustinians in 1810.

During the Philippine-American War, a five-member team of Filipino guerrillas used the church as a base to repel American attacks. -PNA