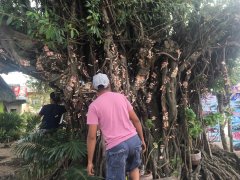 LAOAG CITY, Philippines — A century-old balete tree continues to attract local and foreign visitors as they put some money on its trunks and branches for good luck.

Located along the national highway in sitio Dirique in the coastal village of Davila, Pasuquin town, about 27 kilometers from Laoag, hundreds of curious tourists drop by and have their photos taken with the so-called ‘wishing tree’ that has gone viral in social networking sites.

For Yolly Manzano, who owns the lot where the balete tree grows, she believes the ‘wishing tree’ has brought good fortune to her food business.

In June 2017, she recalled a balikbayan from Hawaii who ate at their restaurant noticed the balete tree and he put some dollar saying it could probably a wishing tree that brings in good luck to whoever believes in it.

From then on, other visitors followed suit as they slid some peso denominations and other foreign currencies into its branches.

As of this posting, the amount was estimated to have gathered more than Php 10,000 with some foreign currency bills.

Angel dela Cruz, a Manila visitor said “you have nothing to lose, if you believe in it.”

Other observers, however, suggested that in order to put the money into good use, the amount can be collected to finance a community project that could benefit residents in the area.

Coastal residents in the area are often hit by typhoon all year round. – Leilanie Adriano/PNA