Posted on February 8, 2018 by NewsLine Philippines 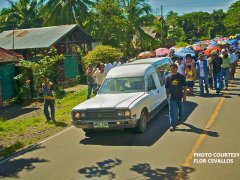 DAGUPAN CITY, Philippines –Due to the daily traffic bottleneck in all the roads here, a city councilor has filed an ordinance regulating the conduct of funeral processions during weekdays.

Filed by Councilor Alvin Coquia, the draft ordinance is actually in anticipation of the impact that may be brought by the opening of the City Mall sometime this summertime and of the SM City Dagupan by December.

Coquia, during a council committee hearing Wednesday afternoon, cited observations that during funeral processions, numerous complaints are being received due to disruption or interference of business and even school classes in some barangays of the city.

He said it has been observed too that the slow-moving funeral procession or convoy on major roads creates traffic build-up on busy streets, at times putting many vehicles at standstill.

Carlito Ocampo, chief of the Public Order and Safety Office, said interment of the dead are preferrably should be held from 9 a.m. to 11 a.m. and from 1 p.m. to 3 p.m.

He said the interment should be over by 11 a.m. to avoid the rush hour from 12 noon to 1 p.m. when students go home for lunch, and 4 p.m. when they go home from school.

By practice, interment of the dead in Dagupan is only held on Fridays, Saturdays and Sundays.

Monsignor Alvin Platon of the St. John Metropolitan Cathedral said the church can hold a funeral mass on any day requested by the relatives of the dead except on Sundays. He added that they limit masses to eight in a day.

The proposed ordinance will also require that once the funeral convoy leaves the funeral parlor, it shall proceed in normal traffic speed.

For those requiring walks, per tradition/culture, designated walk areas will be identified based on the assessment of funeral parlors.

It was also proposed to be deemed as unlawful for any funeral service provider to use routes and lanes other than those designated in the ordinance.  -Leonardo Micua/PNA