ASEAN declaration on rights of migrant workers ‘a work in progress’

Posted on April 30, 2017 by NewsLine Philippines 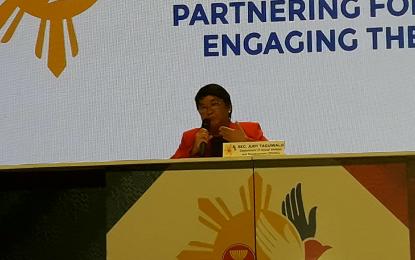 MANILA, April 30 — The expected “declaration” on the Protection and Promotion of the Rights of Migrant Workers may likely takes place by November of this year.

Taguiwalo admitted that some issues raised on the declaration are still being discussed further by labor ministers of ASEAN member states.

“Some (ASEAN member) states expressed the hope that by November an agreement can be reach to implement the (draft) of the declaration which was made 10 yrs ago in Cebu to specify the specific provisions on how the migrant workers right are protected and promoted in the region,” Taguiwalo said.

“So it is still a work in progress. We hope to have it signed in November in the 31st Summit,” Taguiwalo said adding that she herself love to present the said expected outcome document for migrant workers who encounters different challenges in terms of losing jobs, problems on medical access, etc. as consequence of their desire to earn a living and working overseas.

The document is also an instrument that will protect migrant workers from the other ASEAN member states.

Meanwhile, while the awaited declaration has yet to be signed, the ASCC chair said that a “fruitful conclusion” was still arrived as the ASEAN member countries adopted the ASEAN Declaration on making “Civil Service a Catalyst for Positive Change in the Region.”

The declaration was marked by the signing of the ASEAN member states’ leaders headed by President Rodrigo R. Duterte in the conduct of the 30th ASEAN Summit in Manila.

The theme for ASEAN this year is “Partnering for Change, Engaging the World.” (Leilani S. Junio/PNA)