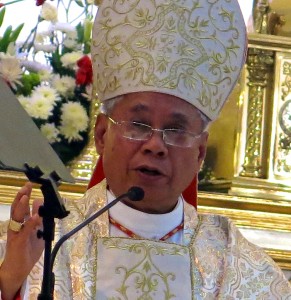 Davao City, Philippines—A Mindanao Catholic cardinal asked the people in the whole of Mindanao island to stay to be calm in the face of Martial Law.

Cotabato Archbishop Cardinal Orlando Quevedo in a statement in behalf of Mindanao Bishops urged “Be obedient to the just commands of lawful authority, and not to provoke violent reaction.”

Quevedo said the President has just responded to the Marawi crisis placing the entire Mindanao under Martial Rule .

He said many criticize the decision as reminiscent of the horrors of a past dictatorship but they believe the decision is justified.

“We are aware that the problems of peace and order, of the continuing disruptive activities of other rebel groups, the problems of criminality and drugs, of corruption and underdevelopment are in every nook and corner of Mindanao,” Quevedo’s statement added.

He said the answers to many questions are still speculative.

“We have many fears. But at present we simply do not have solid and sufficient facts to absolutely reject the declaration of Martial Law as morally reprehensible,” he said.

But, Quevedo said he and the other bishops in Mindanao agreed that Martial Law must be temporary.

“We shall condemn any abuse of Martial Law and as in the past will condemn it outright if it goes in the way of evil. Let us be vigilant,” he said.

He urged the government to remove the causes of terrorism, such as poverty and injustice, through just and accountable governance focused solely on the common good.-Armando b. Fenequito Jr./Newsline.ph