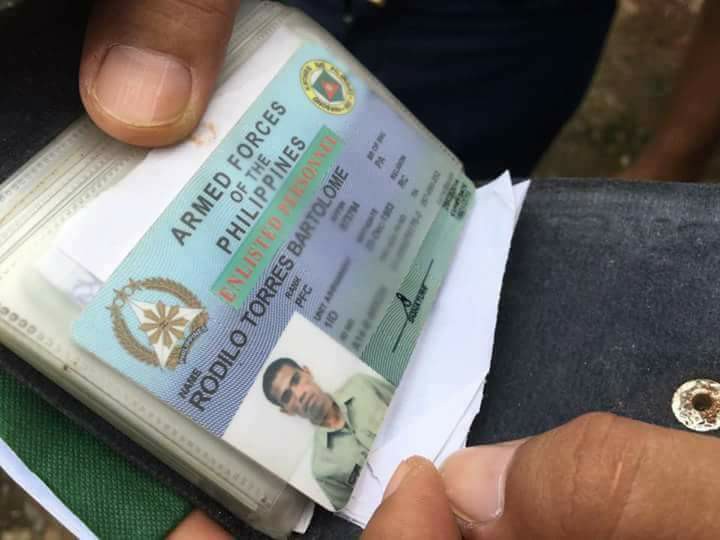 Zamboanga police blotter stated on August 23 at about 3:45 in the afternoon , one Oscar Asuelo a  van dispatcher at barangay Monte Alegre arrived at the Community Police Assistance Center (COMPAC) reported that unidentified male person armed with a gun at the store located at Purok Magdadaro, Barangay Monte Alegre, Aurora, Zamboanga del Sur.

The police blotter stated “However, upon arrival of the responding Police Officers in the area, the unidentified male person suddenly drew a cal .45 pistol moving towards them that prompted the Police Officers to shoot him and neutralized the said person.”

The same report said the said person sustained gunshot wounds on the different part of his body that resulted his instantaneous death but upon verification the police identified male person Bartolome. The Joint task Force Marawi in a statement Bartolome was deployed in Marawi last May after his unit was sent there to help address the crisis.

In a statement, the Western Mindanao Command stated “While we are all in mourning for the death of one of our Marawi heroes, we call for prayers and sobriety, as we seek for immediate resolution to this case.”

The soldiers statement  added ” We would like to solicit your understanding if we cannot divulge more information to you right now since this is a sensitive matter and we wish to give due consideration to the family’s privacy,” as the entire WestMinCom grieves with the family of PFC Bartolome and will extend maximum assistance to his widow and children.-Richard G. Falcatan/Newsline.ph