Posted on August 21, 2017 by NewsLine Philippines 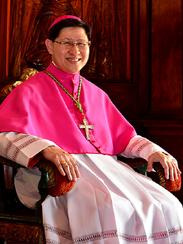 A letter from His Eminence Luis Antonio Cardinal Tagle will be read in all masses (August 20) after communion.

Dear Brothers and Sisters in the Archdiocese of Manila,

On August 12-17, 2017, I participated in the meeting of Caritas Latin America held in El Salvador, a country where many people had been killed in a civil war. Until now it still contends with armed groups. In El Salvador, I heard news of the increase of killings in our own country due to an intensified war against illegal drugs. I am inviting you to reflect, pray and act.

First, all Filipinos agree that the menace of illegal drugs is real and destructive. We must face and act upon together, as one people. Unfortunately, it has divided us. Given the complexity of the issues, no single individual, group or institution could claim to have the only right response. We need one other. We cannot disregard each other. Let us invite families, national government agencies, local government units, people’s organizations, schools, faith-based communities, the medical profession, the police and military, recovering addicts etc. to come together, listen to each other and chart a common path. The illegal drug problem should not be reduced to a political or criminal issue. It is a humanitarian concern that affects all of us. The Archdiocese of Manila would be willing to host such multi-sectoral dialogue.

Secondly, to understand the situation better, we need not only statistics but also human stories. Families with members who have been destroyed by illegal drugs must tell their stories. Families with members who have been killed in the drug-war, especially the innocent ones, must be allowed to tell their stories. Drug addicts who have recovered must tell their stories of hope. Let their stories be told, let their human faces be revealed. We knock on the consciences of those manufacturing and selling illegal drugs to stop this activity. We knock on the consciences of those who kill even the helpless, especially those who cover their faces with bonnets, to stop wasting human lives. Recall the words of God to Cain who killed his brother Abel, “Your brother’s blood cries out to me from the soil” (Genesis 4:10). Those with sorrowful hearts and awakened consciences may come to your pastors to tell your stories and we will document them for the wider society. I call on all the parishes in the Archdiocese of Manila to mark the nine days from August 21 (Memorial of St. Pope Pius X) to August 29 (Beheading of St. John the Baptist) as time to offer prayers at all masses for the repose of those who have died in this war, for the strength of their families, for the perseverance of those recovering from addiction and the conversion of killers.

Finally, let us conquer evil with good (Romans 12:21). Let us save the lives of people most vulnerable to drug dependency: the youth, the poor and unemployed. Words of solidarity without tears and acts of compassion are cheap. I enjoin our parishes and vicariates to commit again to the parish-based drug rehabilitation program of the Archdiocese of Manila called Sanlakbay in partnership with the local government and police. I ask the Basic Ecclesial Communities and other organizations of the lay faithful to care for our neighborhoods in coordination with our partners.