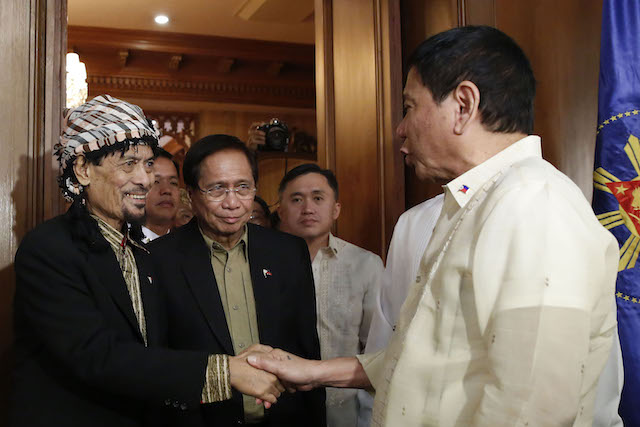 THIS best describes fugitive Moro National Liberation Front (MNLF) leader Nur Misuari when he was presented to President Rodrigo Duterte in Manila on Thursday, November 3, seven days after the court suspended the proceedings and enforcement of warrants of arrest against him.

President Rodrigo Duterte presented Misuari and his delegation were presented to the members of the media in Malacanan.

Misuari went into hiding after he was issued warrants of arrest over rebellion charges in connection with the 2013 Zamboanga siege.

The MNLF founding chairman was also charged with crimes against humanity for the 3-week Zamboanga siege that killed over 200 people, mostly rebels, and displaced about 24,000 families.

Last October 27, Pasig City Regional Trial Court Branch 158 hearing the rebellion charge against Misuari granted a motion to suspend the proceedings and enforcement of warrants of arrest against Misuari. It is effective for a period of 6 months unless sooner lifted by the court.

In granting the suspension, citing the support from the Office of the Presidential Adviser on the Peace Process (OPAPP) and the Department of Justice. The defense counsels and the Zamboanga City government did not oppose the motion.

I received a call today from Presidential Peace Adviser, Secretary Jess Dureza informing me that he just landed at the Zamboanga City International Airport for refueling enroute to Jolo, Sulu, to fetch MNLF Chair Nur Misuari to meet in Manila with President Duterte to discuss the government’s peace road map.

According to Sec. Dureza, Misuari is a key player in the comprehensive and inclusive road peace that the Duterte administration is now pursuing. Sec. Jess took the effort to explain that Misuari’s release is temporary and subject to several conditions imposed by the court, hearing the cases against him as the aftermath of the Zamboanga incident three years ago. The cases have not been dismissed but the hearings are temporarily suspended including the pending warrants of arrest against him.

As I have mentioned to President Duterte in several of our conversations, Misuari has to be accountable for his alleged crimes. Zamboanga City shall continue to pursue our cases in court against him and the MNLF members responsible for the siege. We trust justice will eventually be served. For the moment, we express strong support to the bold and fresh initiatives of President Duterte to seek sustainable peace with justice in the land.