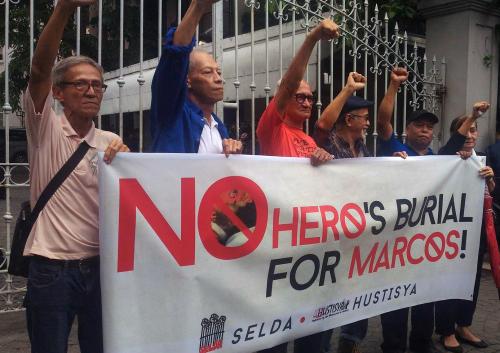 Militant and martial law victims are protesting the burial of former President Ferdinand E. Marcos at the Libingan ng ma Bayani, but the Marcos family is now preparing his tomb.

Along with this, police authorities are preparing the necessary security plans for the internment in Taguig City.

The plan is being mapped out for the peaceful and orderly burial, saysChief Supt. Oscar Albayalde of the National Capital Region Police Office (NCRPO).

While the militant groups and Martial law victims expect the Supreme Court to reconsider its earlier decision to allow the Marcos burial at the LNMB, Marcos loyalist and supporters are expected to troop during the internment.

We expect two sets of rallyists, the Anti-Marcos and the Marcos loyalists, says Abayalde.

Though he said the Marcos family are coordinating with them but actual date of burial has no date yet.

President Rodrigo Duterte has earlier said, he will follow the Supreme Court and even gave go signal for the burial.