Posted on November 29, 2016 by NewsLine Philippines 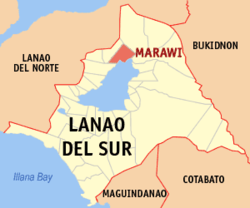 Seven Presidential Security Group personnel and two soldiers  were injured in an ambush which took place at the entrance of Marawi City at around 10:30 in the morning, November 29, a day before Duterte’s visit in Lanao del Sur.

The ambush happened at the checkpoint/barricade manned by the army  just upon entering the arc of Marawi.

Duterte is set to visit Lanao del Sur tomorrow, November 30, to boost the morale of the fighting troops who are fighting the Maute terrorist gorup.

An improvised explosive device (EOD)  was detonated while the PSG and the military convoy were on their way to Marawi City.

Armed Forces of the Philippines (AFP) spokesperson Brigadier General Restituto Padilla revealed, the convoy  were composed of PSG personnel, members of Radio Television Malacañang (RTVM) and the Media Accreditation and Relations Office (MARO), and local troop escorts, they were part of the advance party of Duterte.

“Most were slightly injured except for one PSG member who sustained serious injuries,” he said in a text message to media.

“A Presidential chopper immediately airlifted the seriously injured and 4 others to an undisclosed medical facility for emergency care,” Padilla said.

Military troops are on offensive to take back control of Butig town in Lanao del Sur, which is currently being held by the Maute terror group, and the President plans to visit troops fighting there.

The Marawi and Lanao area are under tight security as the military is on offensive against  the Maute terrorist group.

Duterte Monday said, the Maute is the local terror group linked to ISIS.