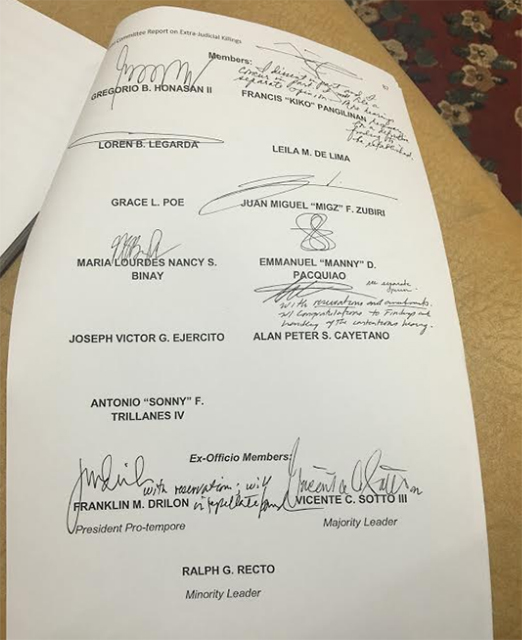 MANILA, Philippines–There is no proof that there were state-sponsored killings in the Philippines, this is the conclusion of the joint committee report which earlier conducted committee hearings on the alleged Extra Judicial Killings.

The report also said the committees did not find sufficient evidence that Davao Death Squad exist.

The eleven senators who signed the joint committee report include: Out of the eleven, three signed with reservations or expressed manifestations to interpellate and introduce amendments during the deliberations.

Pangilinan, in signing the report, said that “I dissent in part and I concur in part.

“I will file a separate opinion. More hearings necessary for a definitive finding to be established,” he said in his note.

Drilon signed “with reservations” and expressed intention to interpellate when the report is reported out to the plenary.

Cayetano for his part signed the report but placed reservations as he expressed intention to place an amendment.

The report said, “There was no proof that there is state-sponsored policy to commit killings to eradicate illegal drugs in the country.”

It however took note of “the many thousands of killings with impunity taking place every year in the last two decades at least.”