President Rody: I will be working during New Year 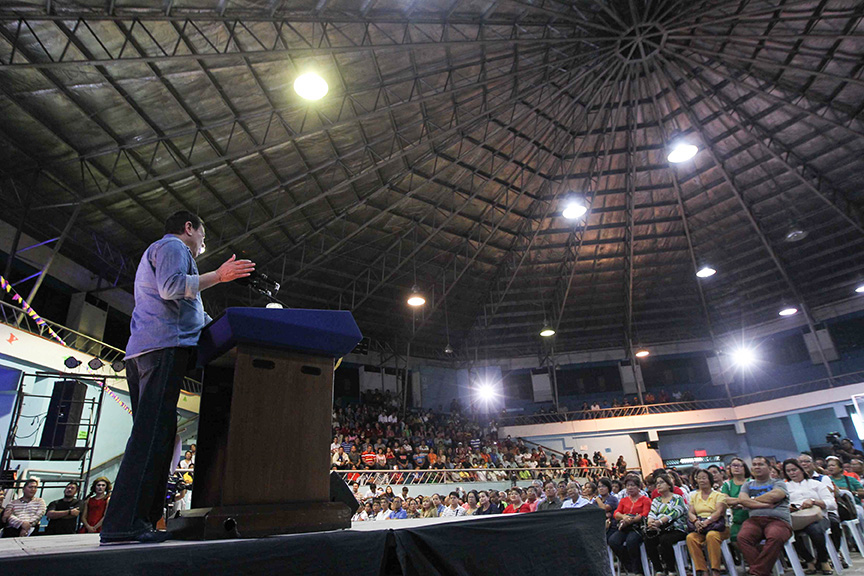 Though, January 2 has been declared a non-working holiday the Chief Executive will be at work.

Speaking before the Christmas party of the barangay captains here, Duterte “Sa New year tarbaho gihapon ko(during the New year I will be working), because I need to attend amd  facilitate the fast rehabilitation of the people hit by the typhoon.”

Last Tuesday, December 27, Duterte went to Virac, Catanduanes to personally hand the relief goods for the victims of typhoon Nina (Nock-ten) at the provincial capitol.

The typhoon killed six people and damaged P25 million worth of crops and destroyed 20 military outposts and camps.

After his Catanduanes visit, he went back to meet village leaders in Almendras Gym here.

On  December 24,  Duterte broke bread with the children with cancer at the Southern Philippines Medical Center (SPMC).

On Christmas day,  he  went to Midsayap, North Cotabato and meet the local authorities as he visited the wounded victims of the Sto. Niño Church explosion.

Cabinet Secretaries were advised to report for work on Monday, which was supposedly a holiday for them to participate in a cabinet meeting which discussed the rehabilitation for Catanduanes.

“We will make the restoration and giving of assistance immediately. We will not wait for the New Year kasi alam ko importante na dadating sa inyo ‘yan (because I know it’s important that it gets to you),” he said.

“Make the rehabilitation fast track and respond to the needs of the people,” Duterte instructed his cabinet secretaries, saying people needs immediate