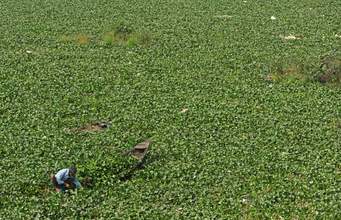 Recent flashfloods prompted the local government and private sector of Dansalan River in Datu Piang, Maguindanao are now finding ways to address the problem as floodwaters continue to submerge low-lying areas in its periphery.

Datu Piang Mayor Genuine Kamaong said manual labor to unclog the vast area teeming with hyacinths made-up of water spinach and lilies was too expensive and laborious that drained his calamity fund.

In a meeting Wednesday with partner volunteers, Kamaong proposed for the immediate use of a floating backhoe that would excavate the thick barriers underneath Datu Sajid Ampatuan Bridge.

Ramil Masukat, head of the Regional Disaster Risk Reduction and Management Council in Muslim Mindanao, said they brought along truck loads of rice and food packs from the autonomous region’s Humanitarian Emergency Action and Response Team (HEART) intended for a bayanihan food-for-work activity.

Volunters from the Moro Islamic Liberation Front, Office of Civil Defense, the Army Sixth Infantry Division, and the United Nations’ Office for Coordination of Humanitarian Affairs were ready to embark in a “Bayanihan-style” of clearing the heavily-silted Dansalan River, a tributary of the much larger Rio Grande de Mindanao, but hold in abeyance due to Mayor Kamaong’s suggestion to acquire a dredging machine.

Kamaong said P4 million would suffice for a secondhand water master which Maguindanao district engineer James Mlok said they have yet to procure.
In its absence, Mlok said his men with the help of volunteers from the municipal government are doing the snail-paced manual labor using chain saws.

Kamaong said before completely clearing the river with clogs, heavy rains may come in anytime to bring in more hyacinths from the heavily-silted upstream that makes up the Mindanao River Basin.

This year alone, series of low pressure areas within the span of two weeks brought in heavy rainfalls induced by tail-end of a cold front, inundating badly the towns of Montawal and Pagalungan, and other municipalities, prompting the provincial government to declare Maguindanao under a state of calamity.

ARMM Executive Secretary Laisa Masuhud-Alamia in a meeting with local leaders whose towns are flood-prone, proposed procurement of individual excavators to be drawn out from their calamity fund.

The issue on LGU’s calamity fund was raised by Mukhtar Farah, UN-OCHA head for Mindanao in order to know the kind of assistance his office can extend.

OCHA is a United Nations agency created to respond to emergencies and natural calamities.

Cotabato City Mayor Frances Cynthia Guiani-Sayadi said based from past experiences of rivers swelling and most low-lying villages engulfed with floodwaters, her administration decided to have its own floating backhoe.

“To lend the machine would be a good Samaritan gesture, but constituents may blame us if calamity strikes anytime, and we are caught flatfooted with our own people submerge in water,” said Sayadi in response to reports that Datu Piang mayor would like to borrow the city government-owned equipment.