Senate will no longer hold probe on DDS

Posted on February 23, 2017 by NewsLine Philippines 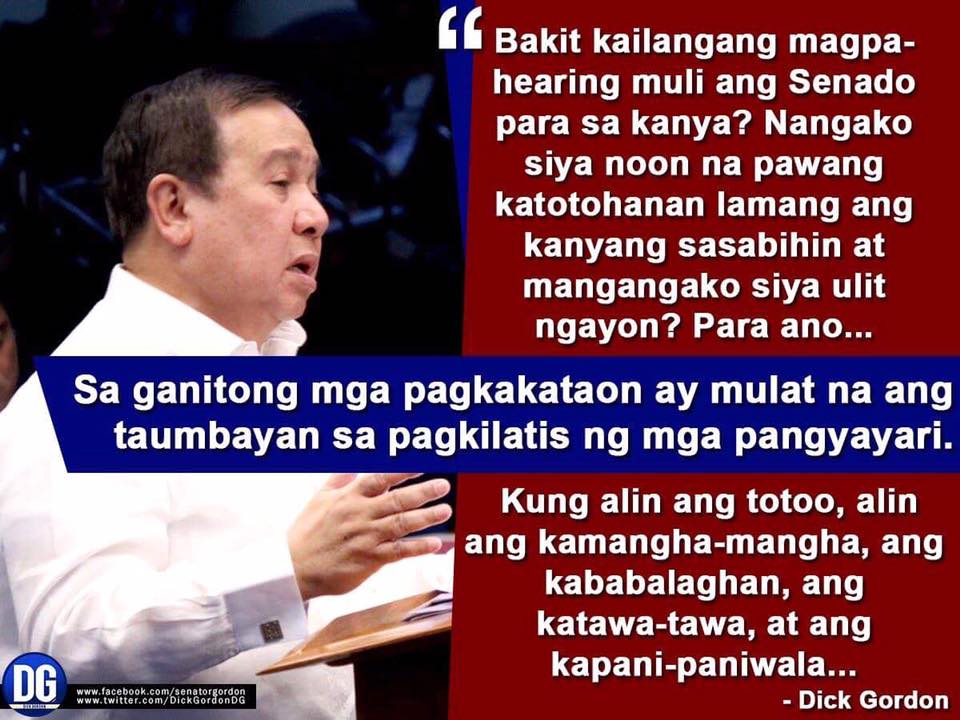 DAVAO CITY, Philippines (February 22) – The Senate Committee on Justice and Human Rights will no longer try and hear the testimonies of retired police officer Arthur Lascañas on the Davao Death Squad (DDS).

Senator Richard Gordon on Monday said he will no longer launch a new probe into the fresh allegations of retired SPO3 Arthur Lascañas on the Davao Death Squad (DDS).

Gordon, who chairs the Senate committee on Justice and Human Rights, said he would no longer waste the Senate’s time investigating Lascañas after the latter flip-flopped on his claims on the DDS.

“He has already appeared before the Senate and he said the Davao [Death] Squad did not exist…and therefore why should I call the committee again? How would I know if he is telling the truth this time?” Gordon said in a phone interview on ANC’s “Top Story.”
“We are not gonna go back to the Senate and say ‘we are gonna investigate again’ just because he has said something and now he is saying another something,” he added.

Lascañas on Monday claimed that former Davao City mayor and now President Rodrigo Duterte ordered the killings, contrary to his statements at a Senate hearing in October, where he said the DDS was only hyped up by the media.

Gordon said the “foolish” Lascañas should file a case against President Duterte, if his allegations are true.
“As far as I’m concerned, we’re done with that. If they feel that they really have evidence against the Davao Death Squad, they should go to court,” Gordon said.

The senator also wondered over the “strange” timing of Lascañas’ revelations, which coincided with the raffling of Senator Leila de Lima’s drug cases on Monday.

De Lima was the one who presented self-confessed DDS hitman Edgar Matobato to the Senate last year.

“I don’t know what’s happening with the De Lima case but it has been said that she is gonna be arrested today and all of a sudden, there are a couple of successive statements made by certain personalities that are really highfalutin,” Gordon said.

“I don’t think we should waste the time of the Senate anymore because these are strange times, people suddenly change their minds, specially on crucial times,” he added.