Posted on March 1, 2017 by NewsLine Philippines 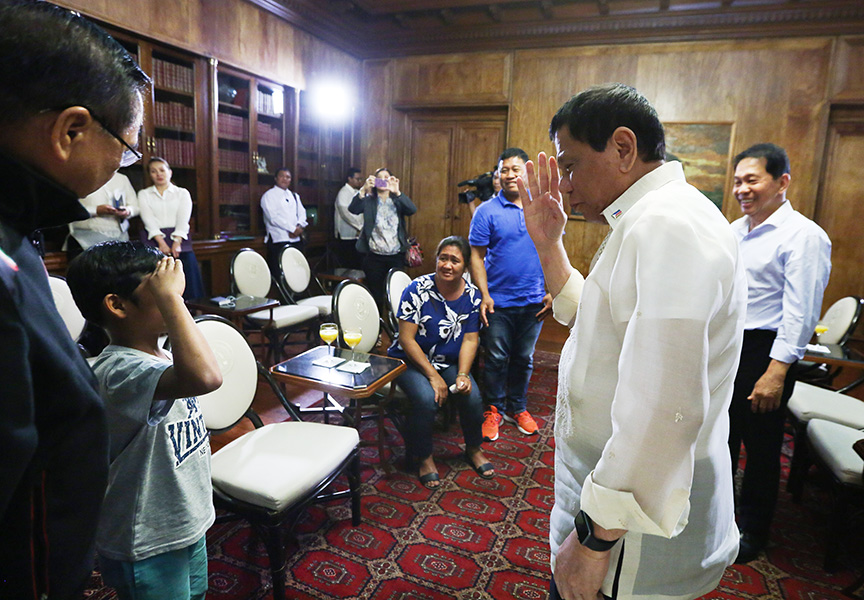 Eight year- old boy Rexon Romoc who was kidnapped in Zamboanga Sibugay and held hostage in Sulu for almost 7 months was reunited with his family today.

We flew him to Manila and turned him over to his parents Elmer and Nora Romoc after a medical checkup done by Dr. Rose Liquete, chief of the National Kidney & Transplant Institute in Quezon City.

President Duterte, who was on top of our recovery efforts, witnessed the reunion in Malacanang.

It has been a long ordeal. Rexon was kidnapped by armed men together with his parents on August 5, 2016. They were brought to Sulu by their kidnappers.

Mother Nora was released on August 22 after paying some small amount to their captors. Upon being released, she then sold everything they owned including their “sari sari” store and borrowed money from friends and relatives to pay for the release of Elmer and Rexon. On November 15, the father was released but the captors did not release the boy and continued to keep him hostage. Until we recovered him yesterday.

President Duterte, so concerned about the boy, instructed me to work on his release without let-up. Former Sulu Gov Sakur Tan, his son now incumbent Totoh Tan and well-meaning Tausugs provided the needed assistance.

Some three weeks ago I again went to Sulu together with the parents hoping to recover Rexon but we returned home empty handed without him.

It has been a long agonizing ordeal for him and the family. Their lives already in shambles due to what happened, the Romoc couple, with their elder 15-year old son had since left Sibugay and temporarily relocated outside metro Manila with relatives.

The first thing Rexon said when he was brought to me by my emissary from Sulu was:
“Asa si Mama ug Papa” ( Where is Mama and Papa?) I tried looking for some birthmarks to identify him.

Just to be sure he was the real Rexon we had been looking for, I asked: “Kinsa imong papa ug mama?” ( what are their names?)

His quick, terse reply: ” Elmer ug Nora!” Bingo!! I hugged him tight. ( I also have a grandson his age.)

Rexon will still undergo some psychiatric healing after 7 months in captivity and going through the trauma of firefights and always on the move as the AFP conducted its pursuit operations.

When NKTI chief Doc Rose gifted him with a toy car with “PEACE LOVE” markings while being medically examined, he told me he also wanted to have a helicopter for a toy. When I asked why, he told me about military helicopters occasionally hovering over them while his captors sought cover tagging him along. Although from a Cebuano- speaking family, he now used more Tausug words — thanks to my emissary, Edmund Gumbahali , a Tausug, who helped me with the translation. He obviously relished those instances as he recalled the hovering choppers with brightened eyes.

Rexon will have his wished fatigue-colored helicopter toy when he goes home for sure.