Posted on March 23, 2017 by NewsLine Philippines 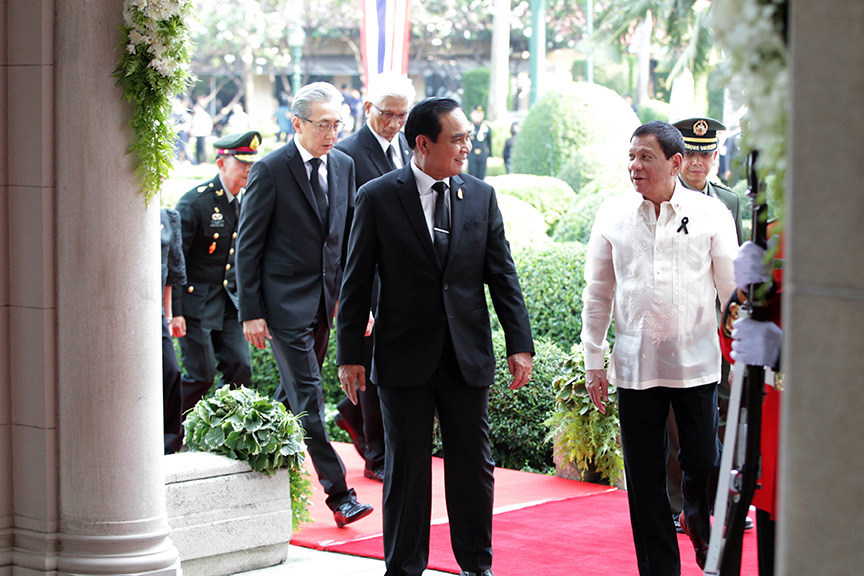 BANGKOK, Thailand — President Rodrigo Roa Duterte and Thai Prime Minister Prayuth Chan-o-cha witnessed the signing of documents on areas of cooperation between the Republic of the Philippines and the Kingdom of Thailand at the Santi Maitri Building, Government House in Bangkok on Tuesday, March 21.

The signing ceremony covers the agreement on areas of cooperation namely, Science and Technology;

Tourism, and Agriculture specifically Philippine Carabao Center (PCC) of the Republic of the Philippines on Swamp and Dairy Buffalo Production.

Both leaders gave a joint press statement following their meeting and the signing ceremony.

President Duterte in his speech after the signing ceremony, rallied for support from Thailand in moving forward to a future of greater peace, progress and prosperity.

“As countries facing similar challenges and as brothers in ASEAN, we have a joint stake in keeping our relations always vibrant, always strong and always geared towards upholding the greater and collective interests of our countries and our region,” he said.

Duterte also stressed the need to address traditional and emerging threats to the region’s collective security and stability.

These include transnational crimes such as terrorism and violent extremism, piracy at sea, as well as the trafficking in persons, and in illicit drugs.

“We stressed the importance of our defense cooperation to achieve these goals and looked forward to the inaugural Joint Committee on Military Cooperation this year,” he said.

On the issue of economic interest, the President said economic reforms are being instituted in the Philippines.

“With our emphasis on combatting corruption, eradicating criminality, and dismantling the illegal drug trade apparatus, we are hopeful of more investments coming from Thailand,” the President said.

The Philippines and Thailand have vibrant economic relations, with a trade value of over 9 billion (dollars) in 2016.

Both countries also recognized the importance of cooperation in agriculture where there have been significant advancements in this area.

“We look to greater cooperation and exchange of best practices in irrigation, artificial rain, livestock and fisheries, and application of technology for soil and water conservation,” he said.

In the area of tourism, the Philippines looks forward to activities such as promotion of joint tourism destinations to harness this key sector of growth.

Duterte stressed the need to maintain peace and stability in the region, including the South China Sea.

“We recognized too, that respect for freedom of navigation and overflight in the South China Sea is in the interest of all counties within and outside the region,” he said.

Both sides emphasized the need for the full and effective implementation of the Declaration of the Conduct of Parties in the South China Sea and expressed determination to complete the Framework of the Code of Conduct in 2017.

In closing, Duterte thanked Thailand’s continuing key role for the growth and stability of the Association. (PNA)