Going to Davao from Cebu, Tuna and Durian “Welcome” us 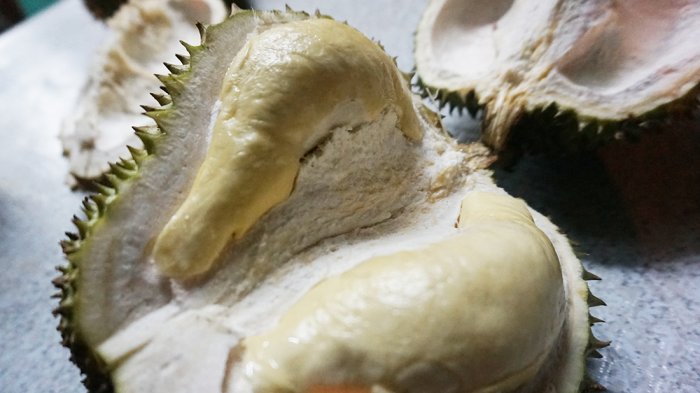 Edith of Newsline.ph is a senior journalist in the city of Davao who was a tour guide “impromptu” for TribunTravel.com for in Davao .

Our backpacks were brought to a waiting four-wheeled grandia van waiting for us then we travelled that night.

How can we forget, it was past 10 pm, do not be surprised if the streets began to empty.

“How as your flight? Are You’re fine, right?” Edith asked, breaking the silence in the car.
Since it was too tired and hungry, we just answer one or two questions Edith.
“We have dinner first, okay!” Edith told us apparenly she knew were were starving.

About 15-minutes away from the airport, Soon, our car stopped in a restaurant named Marina Tuna.

“This restaurant is already closed because it was night, but special for you guys, this restaurant will be opened,” Edith said while showing the writing “close” to the door of the restaurant.

Sure enough, when TribunTravel.com into the restaurant, a waitress immediately prepare food.

“How can you do this, Edith?” said we were curious, were only answered with a smile.

Apparently Edith had ordered some menu before we arrived at a restaurant serving dishes made from the tuna fish.

“Here, you have to try, it is very tasty!” said Edith had us taste the grilled tuna.

With still amazed because the restaurant was closed they could receive visitors, we spent a menu presented.

Although the stomach is already filled, but Edith still wants to invite us to taste durian, which is characteristic of Davao besides charming beaches.
Davao is a city of durian production, where durian Davao also cultivated for export.
In fact, every year the city hosts Kadayawan Festival, at which time the festival takes place anyone could eat durian as much.

Our car enters a fairly crowded street and saw the row of durian sellers on the roadside.

“The name Magsaysay Park, here they sell 24 hours,” said Edith while selecting one of the tables for us to live in.

When the skin is opened, we smelled the tasty durian aroma that make anyone want to eat it.

We also readily take a grain-by-grain, leaving only a durian to durian because we were too full stomach.

That day, dinner in Davao City Davao covered with typical durian was so great.