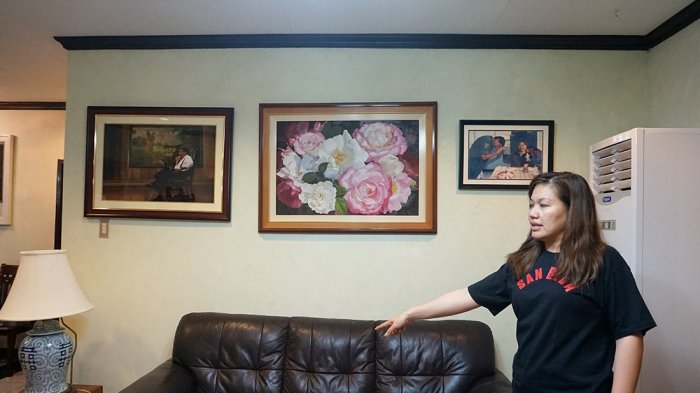 TRIBUNTRAVEL.COM, DAVAO – Davao City is situated on the islands of Mindanao, Philippines, is known as the city of durian production, as well as the beauty of its beaches.
In addition, major cities in Mindanao Islands is also the hometown of the President of the Philippines, Rodrigo Duterte.

That night, Thursday (16/03/2017), after devouring a glut of durian in Magsaysay Street, Edith Ging Caduaya Zaragosa, tour guide “impromptu” TribunTravel.com time it took us get into the van.

“I have already received permission from the owner of the house, I say journalists from Tribunnews want to come,” said Edith to TribunTravel.com arrival at home the number one in the Philippines.

Previous Edith already said it will invite us to meet Duterte.

No wonder, because Edith is co Duterte are both fairly close.

The time was 23:50 when the car carrying TribunTravel.com suddenly stopped.

Apparently the road is the entrance to the house Duterte, and dismissed because the car must go through inspection procedures.

“The road name is Dona Luisa Village Sub Division,” said Edith to TribunTravel.com when asked the name of the residence area Duterte.

After that, the car is running and shortly returned back stop for inspection in the next post.

To TribunTravel.com, Edith said we had to get down from the car and had to fill in the identity of the guest book provided.

Distance to the first post until the second post is not too far away, both are equally placed at a crossroads.

After filling the guest book, the car that we were riding back shortly afterwards drove and stopped in front of a house.

Located on the far left, Duterte an L-shaped house that unites the three plots of land.

Based on the observation TribunTravel.com, the house filled with plants and in front of the gate there is a Duterte “standee” made of planks.

“The standee is made for people who want to take pictures at the residence Duterte,” said Edith as she invited us to take a picture with the standee.

While around the house was deserted, no people except the presidential guard were on guard in front of the house.

Although it was past midnight (12:45am), unexpectedly, Duterte house gate open for us.

Before getting into the house Duterte, Edith asked us to leave the bags in the car.

“The cameras and smartphones may be brought in for the photo, but we just have to leave bags outside,” said Edith.

When entered into, TribunTravel.com greeted with terrace houses that can be fairly simple to measure a president’s house.

TribunTravel.com watchlist, on the front porch Duterte there are a number of fitness equipment rack also contains a number of placards.

While on the terrace wall hung a number of photographs of Duterte and family.

Suddenly, a long-haired woman came out onto the porch and greeted us.

“Sorry, I just dressed like this,” said the beautiful woman who is Cielito ‘Honeylet’ Salvador Avancena, Philippines First Lady and wife of the President of the Philippines, Rodrigo Duterte.
to TribunTravel.com, Avancena say welcome in Davao.

“Welcome to Davao, this is our city,” said the flawless woman in the friendly smile.

Unfortunately, when it comes TribunTravel.com, Duterte was not home because he was in a meeting in Davao City.

Walking in the Living Room set Duterte
Although it is already too late, but still receive TribunTravel.com Avancena as her guest.

“Come in if you want to see the living room of our house,” said Avancena to TribunTravel.com.

Entering the living room, I saw a brown sofa.

While in the living room wall plastered number of frames containing images and paintings of Duterte.

Although not overly spacious, but the living room of Duterte hosted a breakfast for Japanese Prime Minister, Shinzo Abe and his wife.

Near the Duterte’s living room is a simple kitchen with a wooden dining table and other kitchen utensils, dishes, glasses, and a few bottles of wine.

I didn;t realized it was already 1:30 in the morning but the President;s wife still responding to our questions.

Edith hinted to us to conclude conversation immediately with the wife of the number one in the Philippines because it was so late and we have schedules to follow five hours away.

Then we had the opportunity to take pictures with the partner of the Philippine President Rodrigo Roa Duterte.

That night, traveling in Davao City closed with disbelief as it can come to the house Duterte and talk with Lady Avancena.