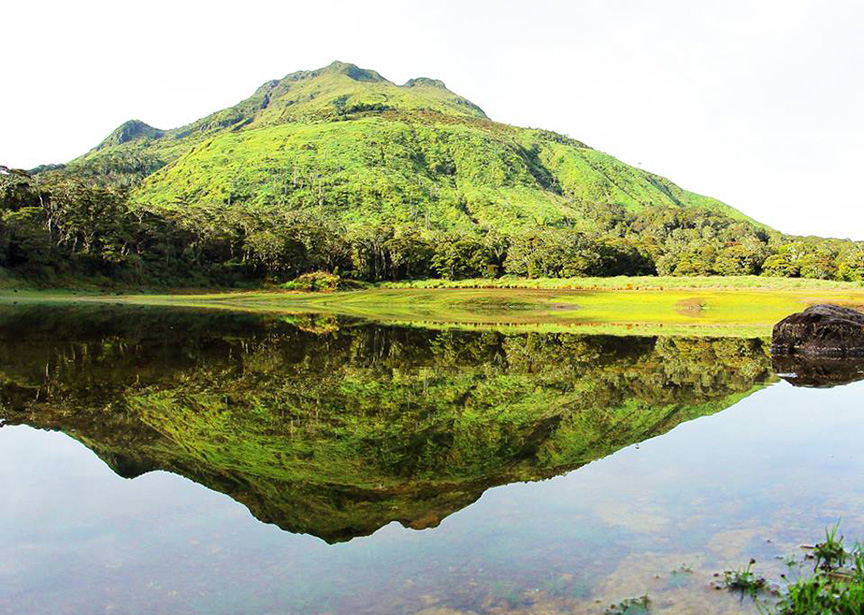 This after it was closed for 13 months following the fire of still unknown origin which ate up over 100 hectares of forest cover.

Joey Recimilla, Kidapawan City Tourism Officer who also sits as the chairperson of the Protected Area Management Board (PAMB) told Newsline.ph “the decision came about last Thursday March 23 during en-banc meeting decided to reopen Mt. Apo to climbers.”
On the reopening the PAMB in a presentation says;

– We push for the reopening of Mt. Apo because this is the only way to protect and preserve what was left of Mt. Apo;

-To promote eco-tourism, culture and the traditional arts;

-To provide direct and indirect livelihood to the communities and the local government.

Mt. Apo Considered the highest peak in the country with an elevation of 2,954 meters, Mt Apo is one of the Philippines’ favorite tourist destinations.

Former Agham Representative Angelo Palmones, who is from Kidapawan City said the implementation of the Comprehensive Management Plan for Mt Apo as mandated by the Writ of Kalikasan in 2014 is a “must” now, said Palmones.

In May 2016, about sixty lumad leaders from all over North Cotabato held Panovaran at the foothills of Mt. Apo to ask forgiveness as they believe that the burning of the mountain was a warning from their God’s that climbers violated the laws of the mountain.

The Panovaran which was spearheaded by North Cotabato Second District Representatives Nancy A. Catamco was done in accordance to the belief of the tribe that there was more serious reasons which non-lumads do not understand why the mountain was razed. During the same ritual, the lumads were told to help cleanse and preserve the sacred mountain traditional lumad way.

On March 26, 2016, over 100 grasslands and in Mt. Apo was razed in a fire believed to have been started by irresponsible trekkers who left a fire unattended.

The PAMB being the highest policy-making body in Mt. Apo, approved the request of various concerned local government units (LGUs to reopen the country’s highest mountain peak).
But Recimilla emphasized “All trails are open subject to compliance of LGU’s management and emergency plan as we agreed on details about ground preparation before allowing the climb.”

-All porters undergo training on environmental protection and preservation;

– Maps and trails as provided by the PAMB must be followed; -Climbers must undergo camp management before they are allowed entry, and ;

-Host Villages must be informed about every time climbers start the climb.

-The trekkers, MUST only visit the peak and capture photos and leave before night time.

“If you did not comply. You cannot open your trail,” Recimilla emphasized.

Also, the body passed Resolution 01 series of 2017 stating the lifting of the prohibition to climb to the mountain. Recimilla said that the Camping Management Rules will be strictly implemented.

The Department of Environment and Natural Resources (DENR)-PAMB decided to open the terrain to give way for more economic opportunities among the residents dwelling in the area and promote ecotourism.

Reopening Mt. Apo to tourist also provides economic opportunity to residents serving as porters and “It is better to open it because trekking activities is not destructive. In fact it is ecotourism,” Recimilla added.

THE FEES
-Permit Fee P2,000 and P2,500 for standard and peak season where a refresher course will be included.

-The new rate is 50 percent higher compared to the previous collections that ranged from P1,000 to P1,500.

-On top of the permit fees, the hikers will pay an additional exit fees of P1,000 to P1,500. Mt. Apo has various entry points including Davao City, Sta. Cruz, Digos City, Kidapawan City, Makilala, and Magpet.

The DENR will place a permanent monitoring team to ensure that rules are followed. Among the new policies under the camp management are restriction of liquor, smoking, and sleeping at the peak during night.

Ruth Manigos Tawantawan, DENR XI regional director says “this time climbers must help to protect and preserve Mt. Apo or we will close it again until it is fully rehabilitated.”
With the opening, mountaineers can also help in seeing to it that no illegal activities are made and can be reported to DENR should there be any.

Unlike before where many climbers are allowed to trek, the PAMB agreed to limit the number of trekkers to 50 per entry point.

This is to regulate the number to ensure the preservation of the mountain. All the violators will pay a penalty of P2,000 for any violations.

Pascual Mansayagan, a porter said he is happy that it is open for him to generate income from the tourist.

Being a lumad himself, Mansayagan said in vernacular “aside from climbing, tourist must learn to love and protect Mt. Apo because it is sacred to us. That is the place of our Apo (God).”

Tawantawan said Mt. Apo is still on the process of healing, as she expressed apprehension that growth of the damaged grasslands might be disturbed with the influx but she explained “it was the lumads who pushed for it’s reopening.”

Recimilla emphasized “There will be strict implementation of policies, because more than the economic gains, we have to consider the preservation of our environment and our national heritage.”

Environmentalist are also expected to monitor the activity as the reopening is now a reality.