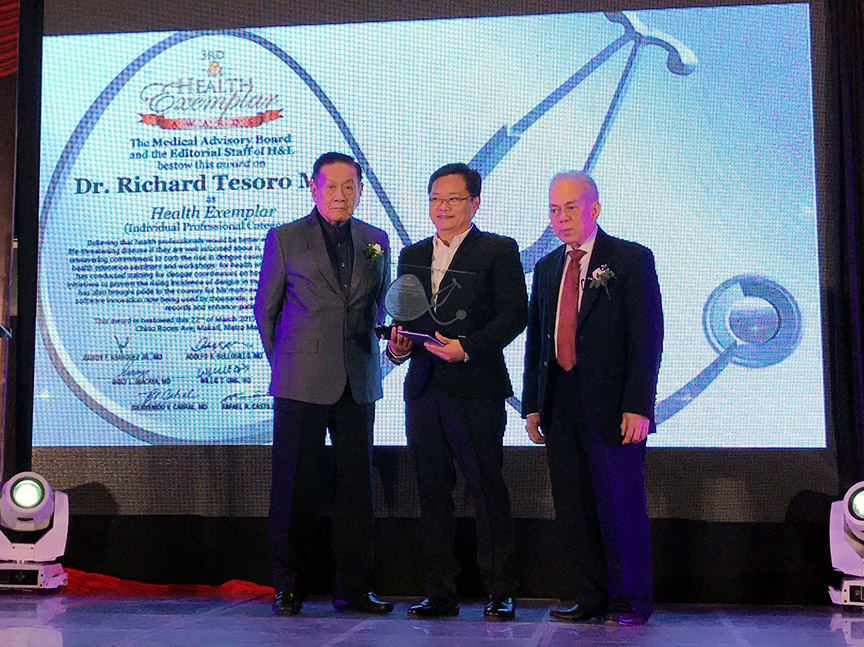 A physician from Davao has been named as one of the five recipients of the Third Health Exemplar Awards in Makati City last month.

Dr. Richard Tesoro Mata, who has a clinic in Panabo City but lives in Davao City, was recognized for his anti-dengue advocacy.

“(He) works patiently one barangay and one community at a time, as he envisions that each and every region of the country will be empowered with the proper knowledge and skills to significantly curb the rising prevalence of this potentially serious infection which cuts short the lives of hundreds of Filipino children annually,” said a statement released during the awarding ceremony.

In recent years, the number of cases of dengue in the country has been increasing.  In 2015, about 200,000 cases were recorded with about 600 reported deaths.

“The incidence has not been noted to decrease significantly despite all efforts by the government and private sector,” the statement said.

“Whereas previously, the increase in cases was noted only during the rainy season, it has now evolved into a continuing problem all year round,” the statement added.

In his acceptance speech, Dr. Mata pointed out: “There are simply too many dengue deaths worldwide that I do believe could have been prevented.”

According to him, dengue could be the most misunderstood disease in this planet today. “In my years of practice, I have discovered a lot of things that are so important about this disease but it’s not yet written in medical textbooks or in any website, thus I made it an advocacy to teach it in the simplest way possible as (Albert) Einstein said, ‘If you can’t explain it simply, you don’t understand it well enough.’”

Most people are terrified of dengue because when the blood platelets decrease, it causes severe bleeding and ultimately death.  This thinking, he said, is very wrong.

Dr. Mata graduated from the Davao Medical School Foundation in 1997.   He spent 12 years in Panabo City, where he has helped the local government unit in the prevention and mitigation of dengue in the area.

Sharing his experiences and best practices in Panabo City, he has also worked with the local government of Davao City to duplicate and expand what he has achieved in dengue prevention.

“When the mosquito bites you, the dengue virus will enter your blood vessels and it will cause plasma leakage, or what I call as butas ang mga ugat.  It’s like you have thousands of pinpoint holes in your blood vessels that causes it to leak with water that will cause dehydration,” Dr. Mata said in his acceptance speech.

“Para kang supot na may tubig na may butas butas.  It’s like a secret diarrhea. And that’s why it’s dangerous because you cannot see the fluids that comes out of the vessels unlike in loose bowel movement where it’s obvious. So, it’s easy to estimate the needed amount of hydration in diarrhea than that of dengue. All the worst if you don’t even know its dehydration.”

Dehydration also causes kidney failure, which result from the decrease in urine output.  “This causes the water to be retained in the lungs thereby creating congestion that can kill the patients,” Dr. Mata said.

Many people believe congestion is caused by over hydration.  “But the truth is, it is caused by kidney failure due to dehydration,” he said.  “That’s ironic, right?”

Dr. Mata suggested that doctors should focus on improving the knowledge and the management on hydration.  By doing so, he said, “we will save thousands of patients from those complications of dehydration and even from dying.”

If only the scientists got it right from the start, it should have been called dengue dehydration fever and not dengue hemorrhagic fever. “Imagine how many people we could have saved by proper understanding,” he pointed out.

“So how will you know if you are well hydrated,” he asked.  “I leave you with this note: ang ihi ng ihi wagi! Dengue patients must be well-hydrated with Oresol and dextrose. If the patients are well hydrated, they will always urinate.  With an almost clear color (of the urine)!

“Those who urinate small with longer intervals and with dark colored urine are in danger of severity. The good news is that the quality of the urine can warn us before the blood pressure drops and thus can be hydrated early and save the patient,” Dr. Mata concluded.

Three more individuals and an organization were also honored.

Dr. Edgardo Ulysses Nguyen Dorotheo was recognized for his active participation “in various campaigns against smoking here and abroad” while Dr. Iris Thiele Isip-Tan was given the award for harnessing “the power and reach of the internet and social media to enhance awareness on endocrinological problems like diabetes and thyroid disease.”

The Mu Sigma Phi Sorority of the University of the Philippines College of Medicine was commended for its “zealous commitment in serving the marginalized has led to life-changing improvements in the health and wellness of these people.”

The Third Health Exemplar Awards also bestowed plaques of recognition for the commendable efforts of: the Hepatology Society of the Philippines, which provided “remarkable impetus for research on Hepatitis B and enlightened the public to significantly reduce the unfounded stigma suffered by individuals who are carriers of the Hepatitis B virus” and Dr. Faith Go for her continued support in “serving her hometown and other areas in Misamis Occidental through lay forums and preventive programs on cardiovascular diseases.”

Rosamy “Jing” Castañeda-Velasco, a veteran news personality and celebrity mother, was also recognized for extending “her influence and that of her network (ABS-CBN) to help people in dire need of medical assistance; and through her television program, she helps address various family issues on health and wellness.”

The Health Exemplar Awards is bestowed to individuals and organization every other year by the Health and Lifestyle Magazine.

“The awards seek to honor individuals and institutions who have gone beyond their comfort zones and undertake initiatives that can promote better wellness-oriented and health-seeking behavior in their respective target audiences,” explained Dr. Rafael R. Castillo, the magazine’s editor-in-chief and publisher.

The first recipients were Dr. Adolfo B. Bellosillo, Lanie and Ely Latuga, Dr. Willie T. Ong, the Health Promotion and Communications Service of the Department of Health, Philippine Heart Association of the Philippine College of Cardiology, and ABS-CBN’s “Salamat Dok.”

The most recent winners were the Philippine Center for Diabetes Education Foundation, Inc., Engr. Emerito L. Roxas, Dr. Melecia A. Velmonte and Food and Nutrition Research Institute of the Department of Science and Technology.

Special citations were given to Dr. Ida M. Tiongco, UNILAB Active Health, Dr. Teofredo T. Esguerra and College of Dentistry of the University of the Philippines Manila.