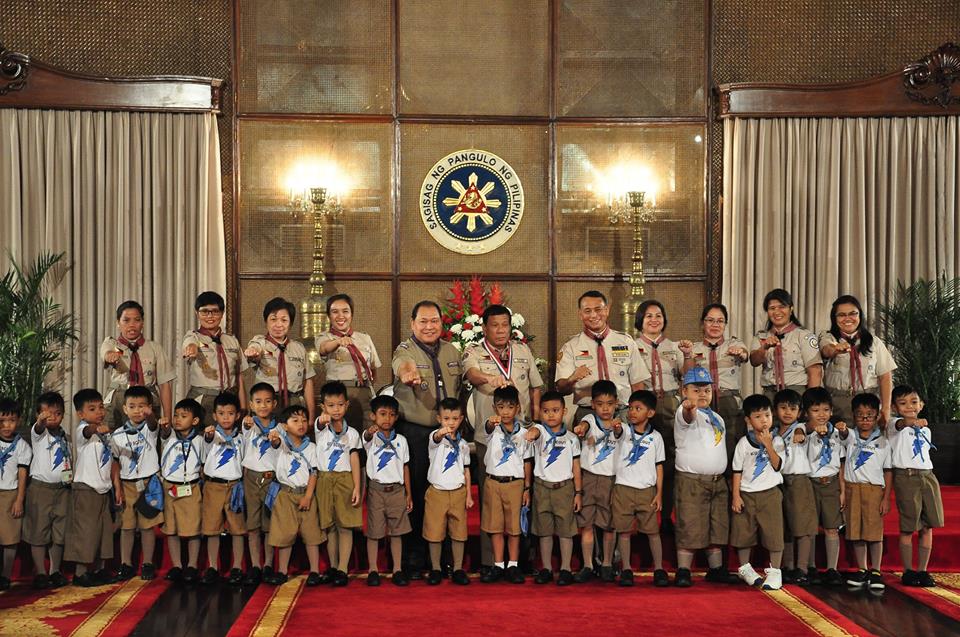 MANILA, Philippines (April 5)—Members of the Boy Scout of the Philippines welcomed their new chief scout President Rodrigo R. Duterte,  with a warm an snappy salute.

Duterte now assumes the post vacated by our country’s former President, Benigno S. Aquino III as BSP’s Chief Scout by virtue of Presidential Decree No. 460 which states that the President of the Philippines shall automatically become the Chief Scout of the BSP.

Duterte is the seventh President of the Philippines who became Chief Scout, starting from Pres. Ferdinand E. Marcos in 1974.

The new Chief Scout, in his speech, emphasized the importance of instilling discipline and patriotism among the youth, so they will be responsible citizens, leaders and even soldiers in the future. He promised to protect the youth from the evils of drugs and exploitation even at the cost of his life, his honor and his presidency.

Several months before his investiture and installation ceremony as Chief Scout, the Boy Scouts of the Philippines has launched an anti-drug campaign in support to the government’s intensified campaign against drug addiction.

The campaign posters highlight the slogan “Be involved..Socialize..Play!” as BSP’s way to help the youth avoid lack of involvement in the community, poor social interactions, depression and anxiety, which are some of the causes of drug addiction.

The BSP expressed their excitement to work hand in hand with the new Chief Scout, and to invite him to various Scouting events such as the upcoming Annual National Council Meeting to be held in Bohol this coming May.(BSP/PR)