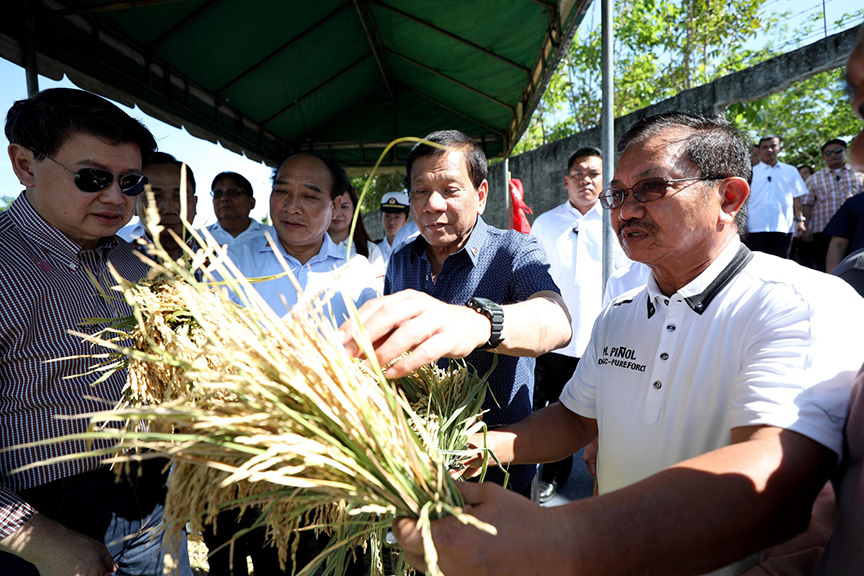 But that’s the program which the administration of Rodrigo R. Duterte has launched in order to raise the farmers’ rice yield to 200 cavans per hectare in an aim to stop importation, stabilizing food supply as globally traded rice thins down 36 million metric tons (MT).

Since the Philippines is one of those countries in Asia that is highly-vulnerable to calamities brought about by climate change, government officials handling food production believe it is time for the country to take a strategic program to stabilize food supply.

During the hybrid rice harvest festival of the SL Agritech Corp (SLAC) – a private corporation deeply involved in the development of the hybrid rice industry – in Talavera, Nueva Ecija, Agriculture Secretary Emmanuel F. Piñol said Masaganang Ani 200 should enable Philippines to stop rice importation which is an economically and politically destabilizing food strategy.

“The truth is we can’t just depend on other countries,” the agriculture secretary pointed out. “We don’t know when the next typhoon will come or when the next El Nino will hit us. The reality is we’re subject to climate change. So, when they say ‘Let’s just import,’ I tell them ‘Don’t you know the volume of rice traded in the market is just at 36 million tons and 34 million of that is committed already?’”

The International Rice Research Institute (IRRI) at Los Baños, Laguna reported that as of 2014, traded rice stood at 42 million MT.

Latest data provided by the Philippine Rice Information System based on satellite and ground assessment and validation showed that the average rice yield recorded in the First Quarter of 2017 is now at 4.15-metric tons per hectare, a huge jump from the previous average of only 3.9-metric tons.

“This means an increase in average yield per hectare of 250 kilos of paddy rice which if factored to the estimated 4-million hectares planted to rice every year would mean an additional 1-million metric tons of paddy rice or 650,000-metric tons of milled rice,” said Piñol.

The estimated annual rice shortage of the Philippines is placed at 1.8-million metric tons.

During his speech, President Duterte said that while there is a need to import rice to fill up the requirements of the country for buffer stock, “the importation must not be done during the peak harvest season as this would compete with the production of the Filipino rice farmers.”

President Duterte also added that while there is already open trade in the face of the ASEAN Integration, he “will ensure that the Filipino farmers are protected from unwarranted competition through the manipulation of vested interests who intend to profit from continued importation.”

Rice importation can be minimized, if not totally eradicated by means of Masaganang Ani 200.

“Masaganang Ani 200 is our best option,” Piñol said. “Next year, we’ll have one million hectares for hybrid rice to achieve sufficiency. We only have hybrid on less than 10% of our four-million-hectare rice land. We’ll present this program to the Cabinet on April 19.”

Without the said program, the Philippines will face food shortage when “the name of the game will be the highest bidder (when rice volume slims)” comparing to that of what happened in 2008 “when price shot up to $1,200 per ton.”

“What if El Nino hits Vietnam, India, China? We won’t be able to compete with China. So, we must improve farmers’ productivity. We don’t need to expand our area. We just need to improve technology. If we raise productivity by two tons per hectare, that will be two million tons from one million hectares, and we won’t need to import,” Piñol said.

During the rice festival, Edgardo Marcelo, who planted SL-8H hybrid rice, has shown that it was possible. According to him, he reaped for the just completed dry season 266 cavans at 59.3 kilos per cavan from his 1.3-hectare land.

This translates to 242 cavans on a per hectare 50-kilo basis. Such harvest generates P216,000 in net income for a four-month cropping period with production cost of around P50,000 at a rice husk (palay) selling price of P20 per kilo.

Piñol told those who attended the rice festival that his department will organize service providers that will allow farmers the use of equipment like tractors, transplanters, and combine harvesters.

With the limited fund, DA cannot just give these away to farmers, but a service provider will make adequate supply of these needs, the agriculture head said.

For his part, Duterte who was also present during the rice festival, affirmed his promise to give farmers free irrigation.

Piñol also committed to put up shallow tube wells. He explained he cannot use irrigation funds for national irrigation facilities of National Irrigation Administration (NIA) since NIA is not under the agriculture department

Likewise, Piñol committed to providing farmers machines and credit by lending farmers P50,000 each in a collateral-free credit that may be obtained in three days. This should start though with listing all farmers nationally who will each have his own biometric ID (identification) card and passbook. –