Posted on April 17, 2017 by NewsLine Philippines 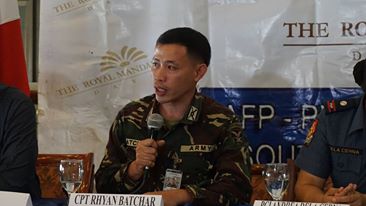 DAVAO CITY, Philippines (April 17)– The leadership of the Philippine Army is asking the New people’s Army to stand with their promise to release two abducted soldiers in Sultan Kudarat.

Army Capt. Rhyan Batchar, spokesperson of the army’s 10th Infantry Division accused the Communist Party of the Philippines/News People’s Army “For its “double-faced lie”  when they refused to release the abducted soldiers saying there is no more compelling reason to hold them in captivity.

On February 2,  two soldiers namely; Sgt. Solaiman Calucop and PFC Samuel Garay of the 39th Infantry Battalion  were abducted at the height of the unilateral ceasefire.

On April 7 in Noordwijkaan Zee, The Netherlands, the National Democratic Front of the Philippines (NDFP), accused the AFP of refusing to suspend military operations to pave the way for the release of abducted soldiers in Mindanao, including Calucop and Garay.

Both the government and NDFP peace panels agreed to undertake measures for the safe and immediate release of abducted soldiers in Mindanao.

But such promises was not delivered as Bachar claimed the 10th ID and the 39th IB suspended their military operations against the NPA rebels responsible for the abduction of Calucop and Garay.

“We demand that the NPA immediately release our soldiers without any condition, as this is the only way to rectify the “treacherous and insincere act” of abducting our soldiers while the unilateral ceasefires are still in effect,” Batchar said.

AFP Chief of Staff Gen. Eduardo Año said there was no need for a SOMO (suspension of military operations), noting that the NPA already released two abducted government troops in Davao Oriental last March even if there was no SOMO in the area.-Newsline.ph with reports from PNA