Are oarfish harbingers of earthquakes? 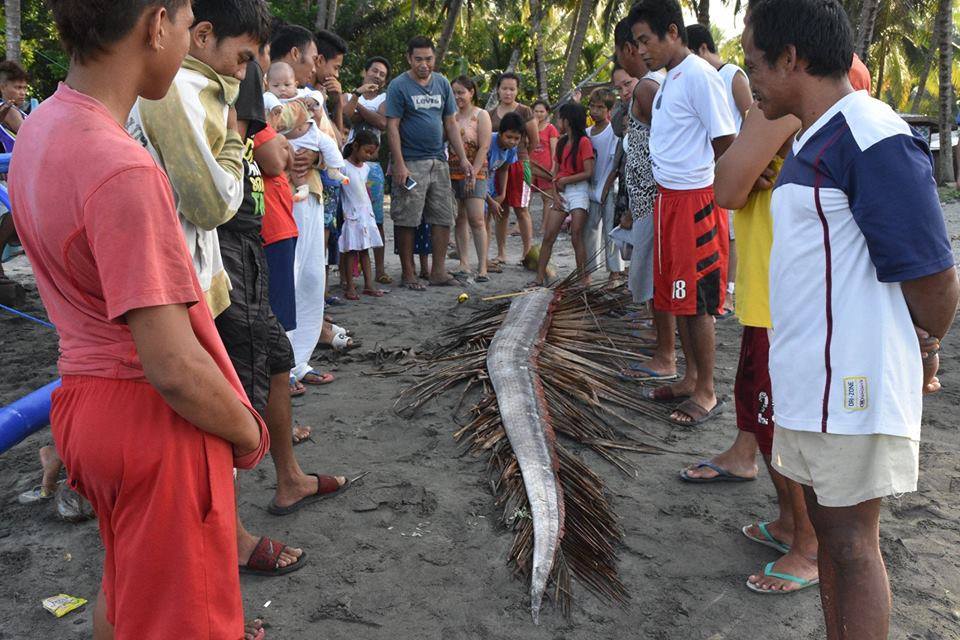 “Wild animals can be natural early detection systems for disasters. (That’s) another reason why we should value them.” – Dr. Theresa Mundita Lim, director of the Biodiversity Management Bureau

Last April 17, on an early dawn, fishermen swimming off Purok Kiblis in Barangay Lomuyon of Kiamba, Sarangani Province were caught by surprised when they saw an oarfish swimming near the shore.

The oarfish “appeared to be already at a weak state,” to quote the words of Carmelo Velasco, the town’s environment and natural resources officer, who posted the found fish in Facebook.

Not long thereafter, the oarfish died “due to still unknown reasons.” It washed ashore and was measured to 13 feet and 10 inches long and about 11 inches wide, according to a report circulated by the state-owned Philippine News Agency (PNA).

It was the first ever kind of fish recorded in the municipality.

“A number of oarfish washed up ashore these past months in parts of Mindanao, triggering belief that they could be related to the recent series of earthquakes, among them the 6.7-magnitude temblor that hit Surigao City and the neighboring areas in February,” PNA reported.

Is it really true that appearance of an oarfish is a sign of a forthcoming natural disaster that will strike anytime near the place where it is found? Some people think so, but others dismiss the belief as superstitious.

This bring to another question: how do those deep-sea creatures like oarfish end up in shallow waters? Are they really good indicators of earthquakes?

“It’s theoretically possible because when an earthquake occurs there can be a build-up of pressure in the rocks which can lead to electrostatic charges that cause electrically charged ions to be released into the water,” Rachel Grant, a lecturer in animal biology, was quoted as saying in a report that was published on the Independent news website in October 2013.

It must be recalled that when a magnitude-9.0 earthquake struck Tohoku, Japan in 2011, about 20 oarfish stranded themselves on beaches in the area. Japanese consider oarfish as ryugu no tsukai, which means “messenger from the sea god’s palace.” In Japanese folklore, Ryujin is the dragon god of the sea and the oarfish is its messenger.

In addition, dozens of the deep-sea creatures were discovered by Japanese fishermen around the time a powerful 8.8-magnitude earthquake struck Chile in March 2010 and the tremors in Haiti which left 200,000 people dead.

According to Japanese old wisdom, the fish rise to the surface and beach themselves to warn of an impending earthquake. “In ancient times, Japanese people believe that fish warned of coming earthquakes,” Hiroshi Tajihi, deputy director of the Kobe Earthquake Center, told The Daily Telegraph in an interview in 2010.

The giant oarfish (known in the science world as Regalecus glesne) was first described in 1772. They can be found in all oceans around the world but they have been rarely seen because they live at considerable depths.

“Although oarfish were likely the source of many historic tales of sea serpents and sea monsters, they are hardly dangerous to people,” wrote National Geographic. “Oarfish feed on tiny plankton and have a small opening to their digestive system. They don’t even have real teeth, instead having flimsier structures called gill rakes to catch tiny organisms.”

Although they are occasionally seen at the water’s surface, scientists believe they are pushed from their habitat “by storms or strong currents, or they end up there when in distress or dying,” National Geographic claimed. “A sputteringoarfish may look like a terrifying sea monsters, but it is not thought to pose a danger to people or boaters.”

According to traditional belief, if oarfish wash up, it may signal a coming earthquake. “But these are just old superstitions and there is no scientific relationship between these sightings (or dead oarfish) and an earthquake,” Tajihi pointed out. The author, Julian Ryall, added that “experts here are placing more faith in their constant high-tech monitoring of the tectonic plates beneath the surface.”

But there are some scientific explanations on it. “Deep-sea fish living near the sea bottom are more sensitive to the movements of active faults than those near the surface of the sea,” Kiyoshi Wadatsumi, a specialist in ecological seismology, told Japan Times.

Tectonic stresses in the Earth’s crust send “massive amounts of primarily positive air ions in the lower atmosphere.” This was what Grant and her research team found, whose study was published in the International Journal of Environment Research and Public Health in 2011.

When these ions reach a body of water, they oxidize “water to (create) hydrogen peroxide. Other reactions at the rock-water interface include the oxidation or partial oxidation of dissolved organic compounds,” the authors wrote. The resulting compounds “may be irritants or toxins to certain species of animals,” possibly resulting in the death of deep-sea creatures.

An article published in the website of Live Science, assistant editor Marc Lallanilla reported that there was a group of physicists at the University of Virginia who studied reports of animal behavior before earthquakes. They discovered that “rocks, when crushed under high pressure that mimicked the force of an earthquake, emitted high levels of ozone gas.”

“Even the smallest rock fracture produce ozone,” researcher Catherine Dukes was quoted but posted this question: “Can we detect it in the environment?” Also, the author added: “Can animals detect a sudden rise in atmospheric ozone?”

Lallanilla wrote: “None of these hypotheses, however, is ready to be developed into an animal-based, early-warning system for earth tremors.” Dukes agreed. “This is not a way to predict earthquakes,” she explained. “It’s just a way to warn that the Earth is moving and something – an earthquake, or a landslide or something else – might follow.”

True but there’s a long history of anecdotal reports of animals acting very strangely in the days or minutes before a tremor is felt by humans.

The earliest reference to unusual animal behavior prior to a significant earthquake is from Greece in 373 BC. Rats, weasels, snakes, and centipedes reportedly left their homes and headed for safety several days before a destructive earthquake.

In February1975, a 7.3-magnitude earthquake struck Haicheng, a city of one million people located in China’s Liaoning province. One day earlier, city officials ordered an evacuation based in part on reports of strange animal behavior: Hibernating snakes in the area, for instance, abandoned their winter hideouts months before normal. The early evacuation is credited with saving thousands of human lives.

On July 16, 1990, an earthquake struck the densely-populated Luzon. The shock had a surface wave magnitude of 7.8 and produced a 125-kilometer-long ground rupture that stretched from Dingalan, Aurora to Cuyapo, Nueva Ecija.

“I was in Grade 3 back then,” recalled Leo Laparan II, a journalist who once worked with Manila Bulletin but is now a college journalism professor. “Before the killer quake, I noticed there were so many dragonflies around our school playground at noontime of that day. Para bang nag-e-exodus sila.”

An article written by Theresa Crouse for Survivopedia compiled some strange behaviors of animals that something is not right will happen. Forewarn is forearmed, so goes a saying. Now, consider the following:

· Bees stop flying around and go to hive.

· Birds go to their trees and aren’t flying around. They may migrate completely away.

· Cows and other animals head to high ground and safety.

· Dogs and cats go missing. One guy checks lost animal posts in his local newspaper and actually uses that as one of his prediction tools for earthquakes.

· Fish jumping an unusual amount, or fish that don’t typically jump, particularly catfish, are jumping. There is some speculation that they can sense changes in the electrical impulses in the air or water caused by impending disasters such as earthquakes.

· Frogs are prone to disappear prior to earthquakes and other natural disasters.

· Dogs become more agitated and may bark more or even become aggressive a few days before a major weather event. They may even refuse to go on a walk or walk to a certain area, such as by the water, during their walks.

· Horses, dogs, monkeys, and other pets may refuse food or treats several hours prior to a natural disaster occurrence.

· Bats may be awake and active in the middle of the day a few minutes or even hours prior to a natural disaster occurring.

· Chickens may become agitated and stop laying eggs a few days before a major storm.

Daniel Escleto, a cocker (sabungero) from Bansalan, Davao del Sur, shared this experience: “At one time in our farm, i saw my range cocks suddenly ‘drop,’ including the ducks and turkeys nearby, same time, then about 5 seconds later, an earthquake of about 4-5 magnitude struck.”

Whether real or imagined, there’s nothing wrong with forearming with the warning brought about by animals.

“Anecdotal evidence abounds of animals, fish, birds, reptiles, and insects exhibiting strange behavior anywhere from weeks to seconds before an earthquake,” scientists from the United States Geological Survey pointed out. “However, consistent and reliable behavior prior to seismic events, and a mechanism explaining how it could work, still eludes us.”