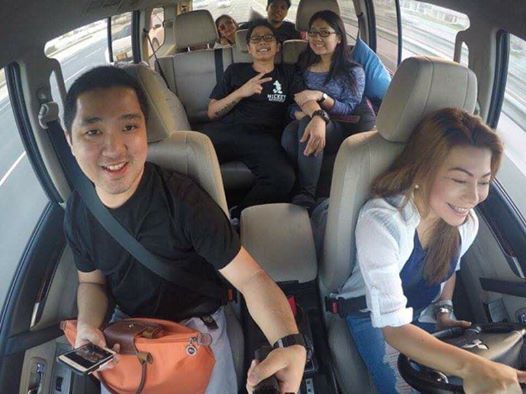 Abu Dhabi,UAE — The Abu Dhabi Police identified the  Overseas Filipino Workers (OFWs) killed during the MaundayThursday incident and  submitted it to the Philippine Embassy here.

Though the police report  was silent about the reported tire explosion of the pajero rented by the  victims, it established that they  were just standing at the back of their vehicle when a speeding SUV car crashed them.

Dulay, an administrative secretary  was the car driver. Earlier reports have it, the tire exploded which prompted Dulay to park along the road side.

The police  report  however stated, the ill-fated vehicle suddenly stalled  the third lane of Al Shahama’s six-lane highway. which prompted Dulay to alight and check the cause of the stalling.

Mendoza’s   sister Ann Paula  and Paraiso’s  his girlfriend Mary Ann, 30 however stayed inside the vehicle.

The four fatalities victims were standing at the rear portion of the vehicle when a speeding SUV behind them suddenly  bumped them. Because  of the impact the victims were thrown meters away.

The remains are still at the morgue of Khalifa Hospital, as police investigation has yet to be concluded.

The two other passengers , Mary Ann and Anna Paula are still in critical condition at the Al Rahba Hospital, Abu Dhabi.

The Philippine Embassy in Abu Dhabi is still coordinating with Police authorities to hasten the repatriation process of the victims’ remains.

Philippine Embassy staff have contacted the families of the victims.

While the Philippine Consulate General (PCG) in Dubai and the Philippine Overseas Labor Office (POLO) Dubai are working together to make sure that the six victims will be given all the necessary assistance.

“Since they all worked and lived in Dubai, we will be the one coordinating with the employers for their insurance benefits and all. For the other two victims, since they are still in the hospital in Abu Dhabi, it will be the embassy that will coordinate. It will all be a joint coordination among the government offices concerned,” Consul General Paul Raymund Cortes said at a press conference held at PCG on Monday, April 17.

Dulay, along with Paraiso who worked as a storekeeper, are active members of OWWA. They will each get Ph200,000 insurance coverage for accidental death and Ph20,000 for funeral expenses, as soon as their next of kin completes all the necessary requirements for the claim, assured Labor Attaché Felicitas Bay of POLO Dubai.

Bay is currently coordinating with OWWA Manila to check if the Mendoza family will still get any benefit for Marvin, also a storekeeper, as his OWWA membership was not renewed, said Bay. Interior designer Elli, on the other hand, is not an OWWA member, while survivors Mary Ann, an administrative officer and Anna Paula, were also not listed in the OWWA database.

Bay said OFWs who are non-OWWA members will not be able to claim any benefit from the agency.

“Lesson to be learned in this incident, you need to apply for or renew your OWWA membership, which is per contract basis and renewable every two years. Yung iba kasi nakakalimutan na magrenew ng kanilang (some however forget to renew their) OWWA membership. They are satisfied that they are already employed so they don’t renew their membership anymore,” Bay emphasized.

The OFWs here attended the special mass that the family and friends have offered for all the victims at the St. Joseph church. -Patricia Cleo