Will Duterte take the UP honorary doctorate degree? 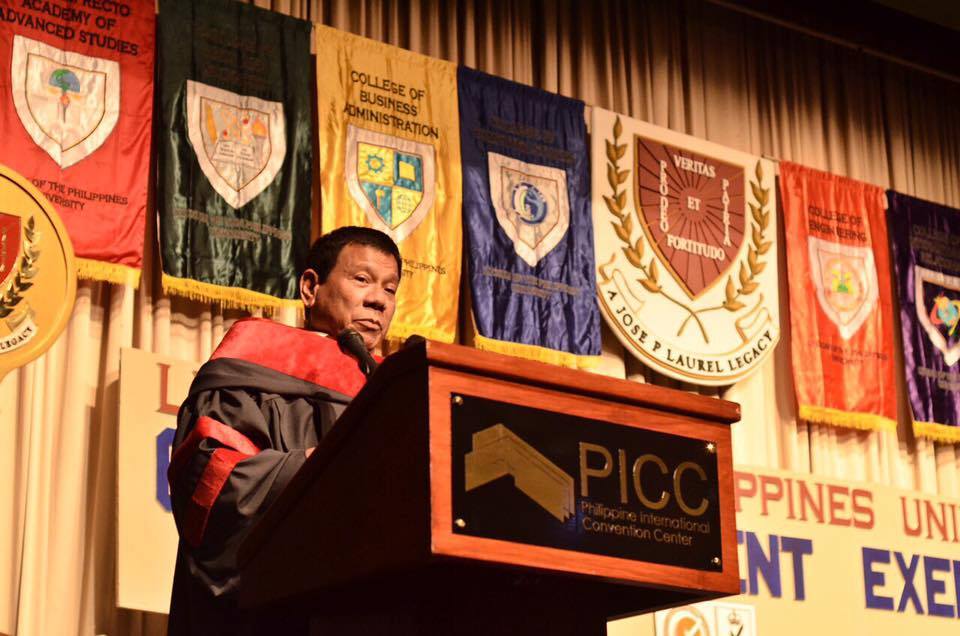 DAVAO CITY, Philippines – The University of the Philippines (UP) has offered President Rodrigo Duterte with an honorary Doctor of Laws degree.

But will Duterte take the offer? In the past Duterte never accepted any accolade since he was mayor.

The  members of the university’s Board of Regents (BOR)  Tuesday revealed and now less than Commission on Higher Education chair Patricia Licuanan said the nomination is part of tradition.

“Hilasan ko (It feels awkward), I am not used to it, I am just doing my job, I don’t need it,” Duterte often told reporters whenever an award is given to him

In 2014, Duterte was  honored as “World Mayor” given by City Mayors Foundation to give recognition and honor to those who serve their communities well.

But when he learned  about the award, Duterte said “Take my name out of the list, I don’t need the award,”

“I take my job seriously because I am the mayor, but if you say, you’re giving me an award, I won’t accept it, ayaw ko iapilapil,ngil-ad tan-awon (don’t include me, it doesn’t look good),”

In 2010, Duterte also  declined other awards for the city, including the anti-smoking award in Singapore in 2010 and another award given by the American Cancer Society.

The UP Board of Regents  decided  “In keeping with tradition, UP will confer an honorary doctorate on the President.”

But Lawyer Theodore Te said he was offended by the plan of the UP Board of Regents, the highest policy-making body of the premier state university, to recognize Duterte, whom he believes has encouraged impunity and weakened the rule of law in the country.

Another group is also protesting the  supposed conferral of Duterte saying when he took office some 2,000 have been killed.

But the Human Rights Commission says they do not have sufficient proof that Duterte ordered the murder of criminals.

Duterte has repeatedly said he never craved for fame “I am here to serve my people and protect my country.”

Will the award make or unmake Duterte?

Now, to the warring forces inside UP,  who wants your degree?